The Cultists and the Dragon reach No1

Just a quick update to say that the Obliterators and Aegis Line were completed in time for Sutton Coldfield last weekend and both did me proud. I'll get pictures up just as soon as I can.

In the meantime I've been busy... again....
Heldrake is completed although the light in the photo has washed it out a bit. Still take it from me that he's done with just the basing (including some weird peppers terminator kindly donated by Eddy ages ago) to be completed. Should be able to complete before Sunday. 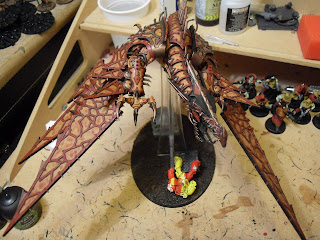 And because I was waiting for the wash to dry on the Heldrake I decided to get some Cultists added in. Why these first and why the Autogun squad? The Aegis Line. In Sutton I was manning it with 5 Berzerkers which just felt so wrong so instead I'll let the mad frothing loonies go and do what they do best and add these Cultists into the protection of the Aegis. 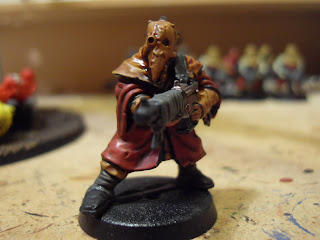 I need to apply highlighting to the red and grey pieces plus pick out any cables but essentially he's done. Just block painting with Mechrite Red, Tau Sept Ochre, Adeptus Battlegrey, Rotting Flesh and Boltgun Metal. Then wash the Red/Grey/Black with Earthshade; the Ochre with Sepia and Red and the Flesh with Red. 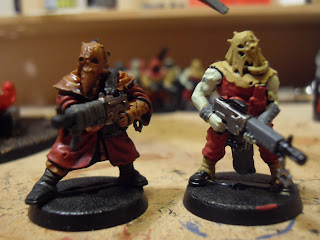 Here he is stood next to a friend who has been block painted so you can see the difference the washes make. I love the washes and I think these boys (the mob is in the background as you can see quite blurily) will turn out just right and look right at home with the World Eaters!

No I'm not aiming to have these done by Sunday as well as I have to sort my own event out for Saturday and cover Year End at work this week. Suspect finishing the Heldrake and these guys is a little bit of a tall order...

What follows the Cultists? Probably the Maulerfiend and then I want to get Zhufor up and running as I like to throw in a character as a reward after painting troops.

And then I have quite taken a fancy to a couple of Forgeworld pieces that are not on my army list. See what Father Xmas brings shall we :-)
Posted by Von

Very nice! The dragon really is looking spiffing and the cultists scheme certainly looks effective and ties into the rest of the army nicely.

You're a veritable painting whirlwind!

Why on earth did I donate our of the Empire finest Strawberry and Custard to such a fiendish project???!

Painting whirlwind eh? I like the sound of that. Complete opposite to a few months ago when just the thought of picking up a brush was too much (or CBA as my son likes to say these days).

40K 6th has really ticked every box for me and next year the World Eaters will be on their travels.

And Eddy: thanks. Must have been one of those weak points in time when I asked: perhaps I smiled sweetly and didn't mention Chaos...?