Game 36 used the diagonal deployment, the mission cards and objective markers. Junt's IG stood shoulder to shoulder with the scarlet and gold of the heroic Howling Griffons.

This isn't a bias report honest.

Arrayed against them were Urn's soulless clanking Necrons bringing with them the unpleasant whiff of damp compost. Urging them on and whispering evils ideas were the Silverfox's forces of chaos including ..... shudder....the Khorne Berserkers. 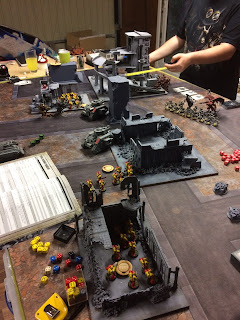 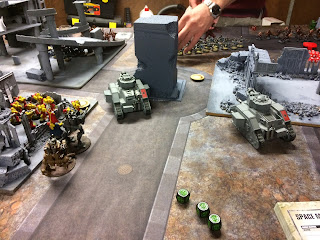 From the outset both forces pushed forward with a lot of fire being concentrated in the centre. The power Demolishers made some early gains against the Khorne forces but the Necrons proved unrelenting once again. 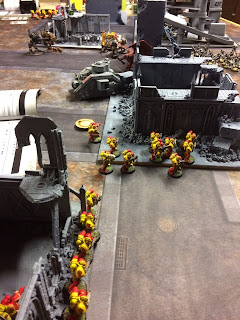 On the Imperial right flank the marines pushed forward against a formation of chaos cultists hoping to break them and gain some objectives. 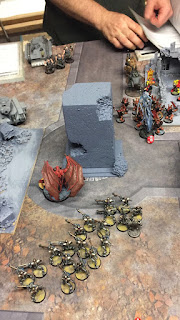 However the dark forces had focused their attacks in the centre and the berserkers dealt out some horrible damage. 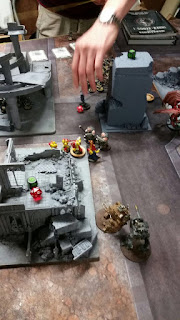 Despite the Ogryns helping mop up the berserkers the dark forces took the day.

Great game. Poor old Silverfox took the brunt of the fire as the Necron blob squads make themselves less appealing as a target with their unwillingness to STAY DOWN!!! Gits!