Last year I backed the Massive Darkness board game kickstarter and it finally turned up in August.

CMON have a reputation for delivering a lot for their backers on their kickstarters and I have to say I was not disappointed. As well as backing it for what looked like a fun game I thought it would be a good way to start a fantasy figure collection for any future role playing I might end up doing for my kids when they are a bit older. I only went for the base pledge plus one additional box of monsters but this meant I ended up with something in the region of 150 figures! Yoiks! 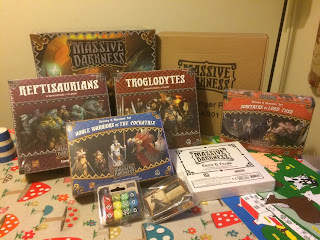 Ain't gonna to lie, this was fun to unbox!

The game itself is fun and the basic rule book contains ten missions that are very different. The kickstarter exclusive stuff also comes with more tiles and six more missions. Seeing that CMON are good at after sales support with additional releases I'm expecting this to have potential for a lot of games. 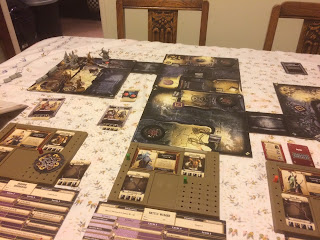 Soooo.. game 39 was a test game I played by myself to learn the rules....and play with my brand new toys. It started out well enough open a door, find baddies have a scrap! Usual sort of stuff. At the end of each round an event card is drawn. These can be benign but most cause you more trouble by creating extra mobs or bad guys or wondering monsters like..... 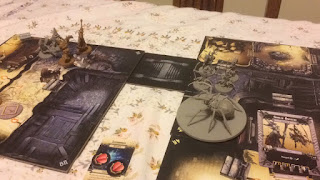 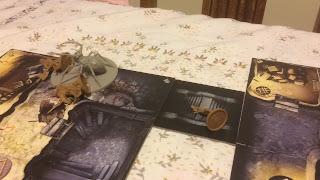 It was still early in the game so my adventurers hadn't had a chance to find much in the way of new equipment to tool themselves up so this fight didn't last long. Still a good test of the rules and fun! 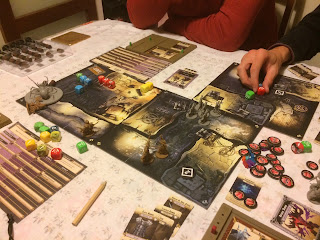 ...yeah you guessed it. The Giant Spider.

We only just managed to kill it on the square before the exit. The time element added loads of pressure to this making it a pretty cool scenario.

Game 42 was called the Chosen One. We had to scour the board looking for elements of an Artifact which a nominated character then had to exit the board with. 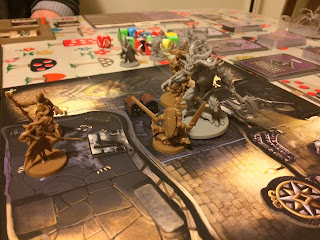 We thought we are boned on turn two as the Hellspawn appeared front an event card to make our day more interesting. A cool mechanic of the game is that these monsters get random treasure and if it is weaponry or armour that they can use......they do. It makes things much harder when you randomly kit out an already hard as nails baddie with a shiny set of plate mail!

Thankfully we managed to battle our way though to the end and Brave Sir Owen lofted the artifact high and declared his self the chosen saviour!

Bit of an ego that one!

The next mission looks like a tough one involving a collapsing dungeon! eek!

Now to crack on a get some of the figures painted!