Some Pulp City for a change and more.

I've been doing pretty well tackling the list of figures I drew up for the 365 challenge but there has been a lot of batch painting this year.

Also on the list were some heroes and villains for Pulp City. We've not played this in ages but I have been working on my city scenery with the primary purpose of getting more games of PC. I'm thinking about making it an early hobby objective for the beginning of 2018 to get the scenery ready so now I've got double reasons to paint them. This has afforded me a break from batch painting masses of thing the same colour. A refreshing change. 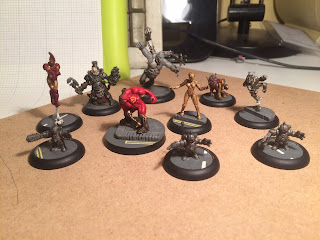 I've not had the opportunity to paint much at work lately but today I managed to get the first colour on some Iron Warrior terminators for 30K. 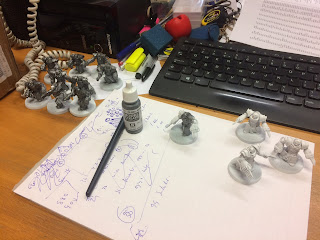 30K had gone a bit cold lately partly I suspect because of the prospect of playing it in 7th edition. Not massively appealing since we've moved to 8th edition.

However....you gotta love the gamer fans! Some stalwart fellows have begun to created legion lists for 30K and they have finished the core legion stuff already.

Link to the Heresy 8th project

Looks like the legion specific stuff is going up too! A truly excellent piece of work from those fellows. So with that on the cards my mind had turned to getting some games of 30K lined up and I also fancy trying some of the other missions from 8th. There are assault scenarios in the book for attacking defended positions and it stuck me that this might be fun to do for 30K.

So I got some walls from TTCombat and some big guns to be emplacements. 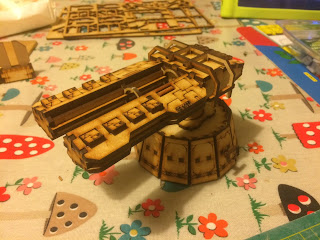 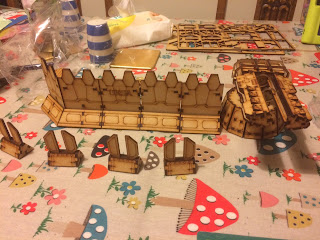 This is just the first set of each. Another gun and another wall set to be made. I also want to dress them slightly to make them fit the Grimdark a bit better. I've made some molds of skull bits and light fittings to add to them.

But I need to get some more figures painted first before letting myself get to distracted by that!

Colours 2017 wargaming show in Newbury at the weekend so i'm bound to find even more distractions there!

Very nice work on the ARC primates and your other supers. :)