"There are no Wolves in Newbury" - only rats!

Hi all, WolfGeezer here, popping my blogging cherry. Although now that I have discovered the existence of this site I see there are several references to me and pictures of my models on here going back years. I have been persuaded into joining this GoG X challenge, which will be the first of any such challenge for me, so figured I should start with a quick intro post.


While I love playing all these games since J introduced me to all this stuff about 13 years ago, it took me a couple of years to really start to enjoy the painting. I loved the list building, deployment strategy, on the fly probability calculations, responding to the opponents plans and of course the fickleness of those dice!


Painting itself seemed to take way too long to get end products that I still really couldn’t be proud of. How I wish I had Duncan Rhodes to guide me like my 10 year old son has, rather than making it up myself. Unlike most of the guys here I have largely remained a one trick pony wolf. Starting with a Space Wolf Ven Dred and Rogue Trader era Grey Hunters, my collection grew to about 15k points in 5th edition. With all the points reductions for Wolves since I suspect it is still around the same even though I’ve probably got another 5k in old points.


After 3 or 4 years I picked up a Tau army through a couple of Ebay lots, added some new shiny (some of which made it out of the box, none of which have actually made the gaming table) and the whole army has probably only seen 3 battles. Perhaps they would have seen more action if I had changed my tactics from shooting once then charging. I can still remember how much Jamie laughed the first time I used them, charging them in against his plague marines to pretty much zero effect. I've almost built a White Scar army, used once to table Jamie's Necrons to a number of cries of broken aimed towards my flyers. I picked up the base of a Custodes army just before this challenge was announced, so given Tau and Wolves will have new releases this year I fully expect them to remain in the box until at least 2023.


The primary tale I expect to tell on here this year is not of Wolves, or Tau or White Scars, but Skaven, my one and only AoS army. While not part of the original GoG adventure I have been brow beaten encouraged to join in this madcap plan to paint 2000 points. I start a little ahead of the rest in theory as I have a number of models basecoated and some are even half painted.


However, my rate of painting is 10-20% (Ed - it's not that high) of these guys so a major challenge for me and I’m not yet ready to start as I still haven’t finished my biggest ever project - my Forgeworld Warhound Wolfhound Titan. That needs to be at least mostly finished before I start the Skaven and has itself exhausted most of the goodwill of my wife over the last 2 months as I take over the dining table for the weekend and my son who doesn’t understand why after 5 minutes painting I wouldn’t want to play Football/Carcasonne/Yahtzee/Chess/Monopoly or preferably being shot by him in Stars Wars Battlefront or racing him in Forza (whatever number it’s up to now?) The next post will cover my Wolfound as I think he deserves one, but for now here’s some of the Skaven boxes that have been calling me for the last 5 years that I have been ignoring up to now next to the WIP Titan. 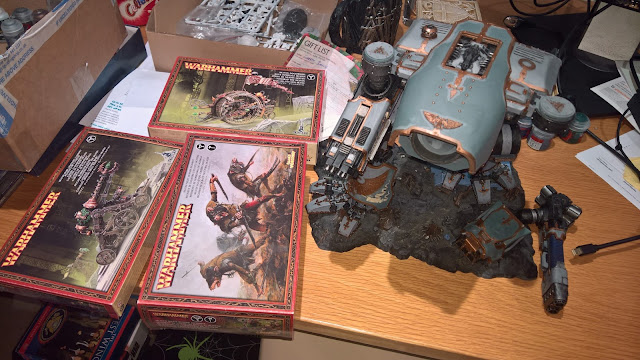 soubds like an excellent plan to get the skaven all painted up - your first army entirely painted by you!

And was you Gift List left in the picture on purpose? ;)

You can do it!

Get cracking and they soon are done!

Hadn't thought of it like that, but I guess that would be technically true. It does include a few models painted by 12 year old me, but it's still me. An army 30 years in the making!