Tzeentch comes to the SilverFox Challenge

The SilverFox Challenge continues apace although that pace has slowed recently due to work travel. That said it looks like it's about to go a bit mad around here as someone mentioned GoGX...

Here then are the next entries in the 2018 Challenge! And today we're going all Tzeentch. Well except the last chap but more on him soon.

First up 20 bases of Brimstone Horrors. Love these little guys as they were so easy to paint. My aim was to try and present a carpet of flame rolling towards the enemy and I decided against trying to paint the teeth etc as they would distract from the overall effect. That and I wanted to get them done quickly! 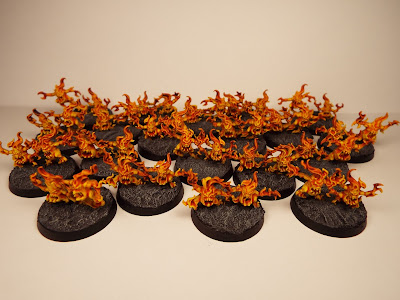 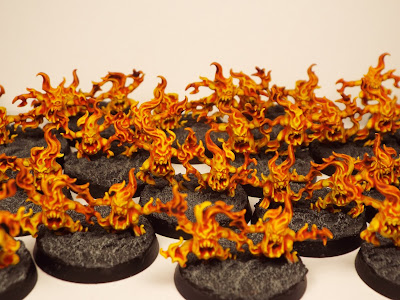 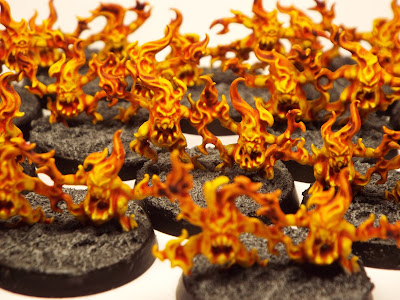 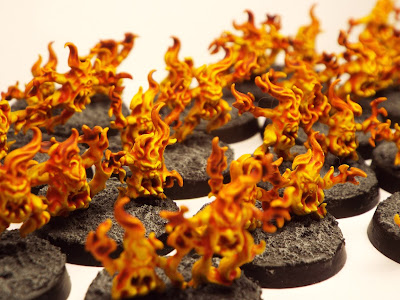 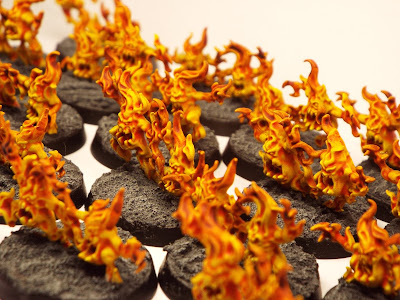 And next up we have one of my favourite units so far to paint: Kairic Acolytes. These are foot soldiers of the Disciples of Tzeentch faction. 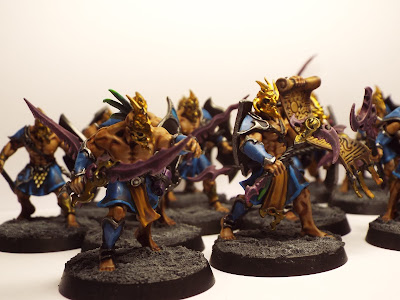 The skin was the piece I wanted to get sorted first. I opted for a base of Rakarth Flesh and then 2 washes: 1 with Sepia and 1 with Reikland Fleshshade. I'm pleased with the results. 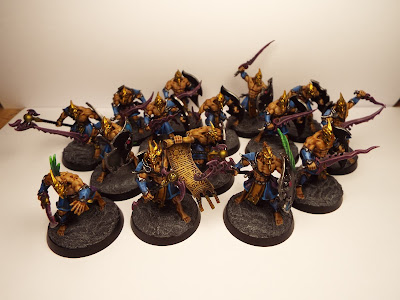 Next came the armour and loincloths. Blue is the traditional colour for Tzeentch so was a natural choice. There are actually two different base blues involved although not easy to see to be honest... 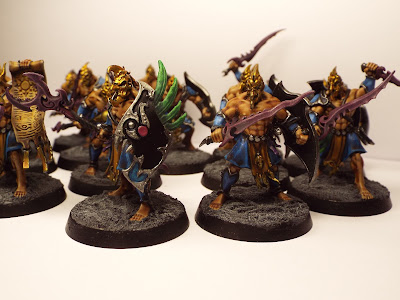 The face masks went through a couple of colour choices before settling on Gold. I haven't washed them down at all as I wanted them to be shiny and standout. 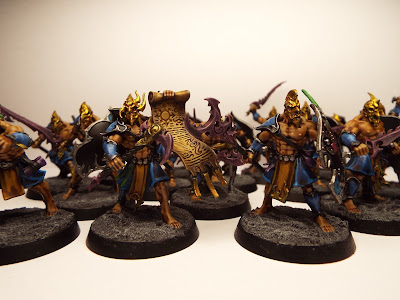 I'm pleased as well with the way the parchment came out on the scroll. 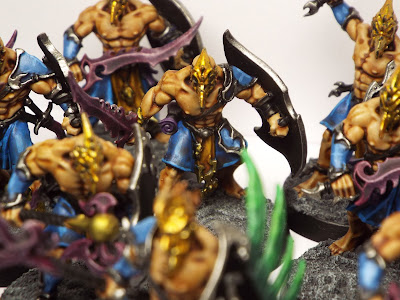 The weapon blades started pink and have toned down through the use of violet washes and white dry brushes. I opted for these colours as I get bored painting leadbelcher weaponry. 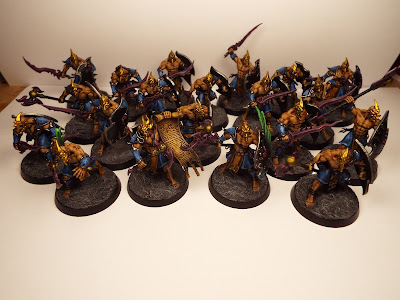 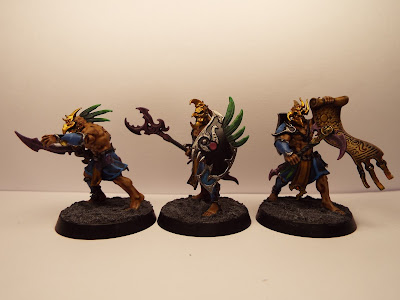 This is the command squad. You'll note the lack of banner. And no musical instrument. These boys can't take those staple members of the command squad and instead have a piece of parchment and a bird-handler. The bird is, er, not here yet. He's out somewhere... 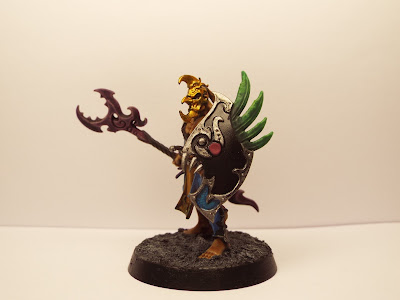 The shields took a bit of working out colour wise. Again I didn't want to overpower the rest of the model so opted for black. I've used a couple of coats of Gloss Black Wash to make it a little more shiny. The leadbelcher rim and decoration has not been toned down either. 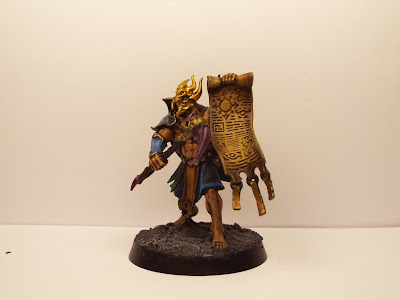 "Do you have time to discuss our Lord and Saviour: Tzeentch?" 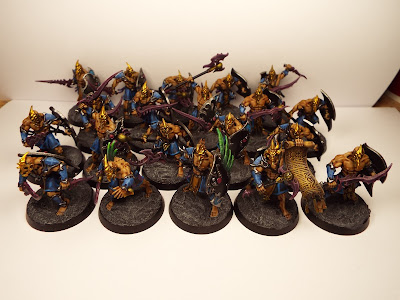 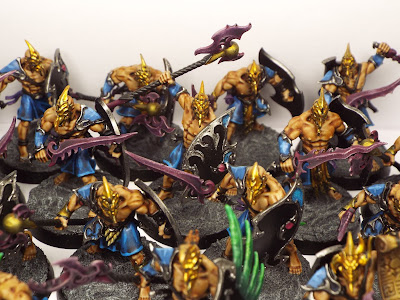 The big stick is a Glaive. No I don't know what it does either! I'll find out when everyone else does.

And now the one who isn't Tzeentch. In fact he's not even Games Workshop. 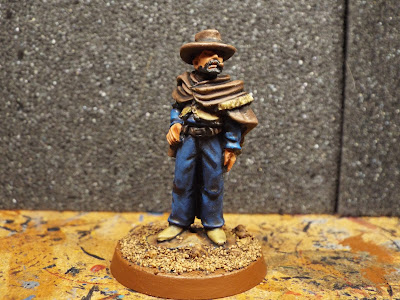 One of the bonus rounds in the Analogue Challenge was Childhood. My Dad introduced me to Spaghetti Westerns when I was a kid and I've loved them ever since. 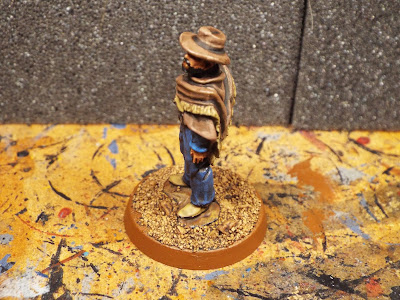 The music of Ennio Morricone is second to none when it comes to film scores and my first LP was the soundtrack to the Dollars Trilogy. 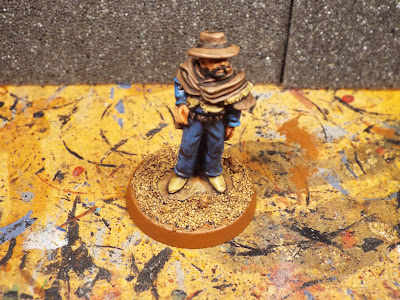 So here is good old Clint Eastwood as the Man with No Name. Il Buono. 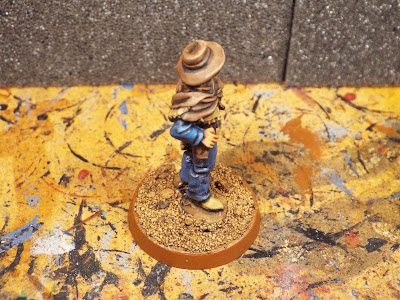 I took a few liberties with the colours as I don't paint historical figures. 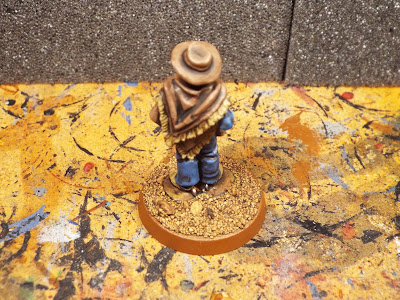 I don't have a game ready for him so he'll be a nice display model for now. 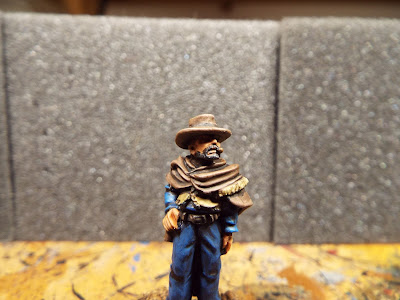 And yes he does have his cigar!

Still on Target...
Posted by Von