Right then, we have set ourselves a challenge borne out of laziness.

We have all these different systems that we play, but we always seem to play on 40k based terrain.  One of the appeals to us as gamers for the Legends of the Old West, was the amount of Wild West terrain we made or found (especially the Old West train in a charity shop :)  )

So we decided that as we have added a number of smaller skirmish games to our portfolio we ought to add to the secenery that makes the games play more in keeping with the fluff.  We have each made a choice, apart from Eddie who seems to be doing a bit of everything as usual.

Silverfox = Steampunk Refinery for Malifaux
Tea Urn = 80s american city block for Pulp City
Silverback  = Graveyard for Malifaux
Eddie = Starting a number of projects whilst whirling around like a fizzing ball of designing madness with half drawn images, of things like gastanks made out of corned beef tins or forest made out of broccoli, flying everywhere.

Now you know how Malifaux is played on a 3' by 3' board, and at the moment we all end up playing in a 12" x 12" square of close combat.  Well I kind of forget those when I started making the scenery.

The church is from a company called Pegasus miniatures, the majority of the graveyard is from Ainsty (nice guys who sent me scraps out of their bin to pack the parcel out - which sounds bad but wasn't.... I mean they sent me extra bits they were going to throw away) and lastly I have added the new Garden of Morr from GW as well as some of their twisted trees.

To come is a gravediggers hovel, some bushes & paths and anything else I can think of.

After a lot of nagging I was encouraged to put this on the blog today rather then when painted and based etc. 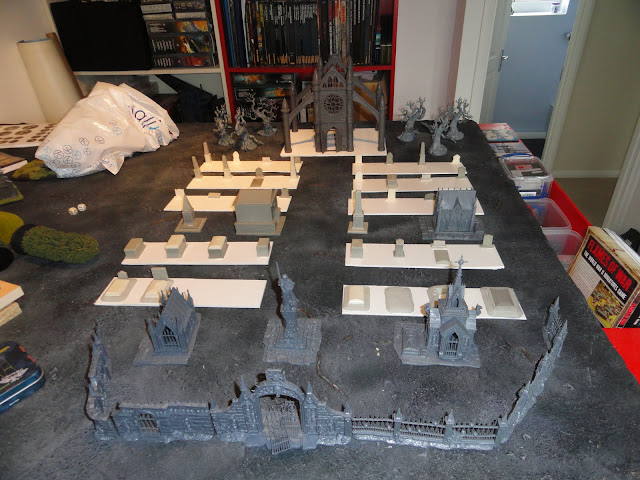 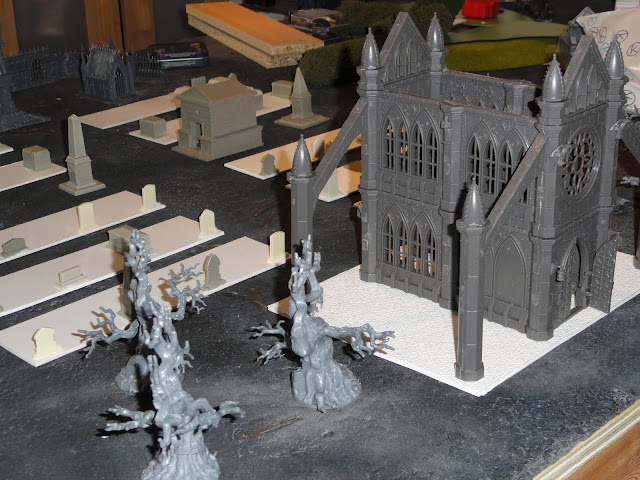 True but I haven't managed to actually achieve anything yet!!

I think, Sir, that we can safely say that you have met your oligations with regard to said promises of a graveyard for Malifaux. I just wasn't expecting The Arlington Cemetary!

Seriously though, plenty of stuff for at least two tables and should work for pulp city too with a sensible sign over the gates!

Holy Churches MalifauxMan! That's excellent and I'm certainly looking forward to seeing what Von Schill can be turned into in there...