Well, there have been a couple of things keeping me busy lately and so this post is really rather late.  I thought I'd post an update to the Soviet challenge that I set myself a few posts ago with all that unpainted, some undercoated, miniatures.

Playing regularly for a few weeks with the Fox was great as not only did I learn more about the army and improve my terrain set up to really add to the games, it gave me the incentive to actually get some stuff painted to make the game and tabletop look great :)


This is my platoon of SMGs.  Soviet "companies" (equivalent to platoons) come in multiples of 8, so up to 25 with command team... and that's before you've added the kommisars, attachments from the HQ, etc.  This unit therefore beefs up one of my existing platoons and has the command stands for my two infantry companies as I realised that I hadn't painted them yet...

Next up is the scary tank platoon! 5 T-34s clocking in at 400 points.  Really scary tanks, but Hen & Chicks (the soviet special rule for tanks which makes then borderline useless if they move and either all the platoon moves or none does, so no move and cover tactics for them) really hinders them, which is great as they play very differently to other nations armour.


Dark green isn't the easiest colour to look nice at this scale, so I went with extreme highlighting with a mixed up light green which I'm pleased with. The commander uses a special character model and is ace! He has a nice bright flag to make him stand out.  the numbering on Soviet tanks was both random and sporadic as far as I can tell, so there are a selection of numbers and red stars on either side of each hull.

Next up is more infantry - I need lots for effective platoons I'm finding so another 8 was the order of the day.  These are standard rifle/MG stands.  As Nick will attest, I don't worry too much about who stands where and just check which is which when it's time to fire!

Next up was finishing the Katyusha platoon.  I'd painted the vehicles and crew, but as they had moulded resin bases and I hadn't finished them, it was pretty obvious that they were standing proud of the holes in the resin...  So I've finished their bases and also painted up the observer and command.  Funny thing is that the command base have been better at spotting than the observer.  I shall need to ask Uncle Joe for some binoculars....

And last but not least is the sapper platoon.  These boys get added to existing companies to beef them up and add some much needed AT in assaults, being AT4. I read an interesting story about the Soviets using dogs to deliver AT mines by training the dogs that food was available under tanks... I think that this was mostly mid war to be fair when times were tougher (and it had mixed success), but I just had to recreate this and use it as a way to differentiate the sapper bases on the tabletop.  So, an order to Peter Pig for some dogs, a little green stuff for a coat (painted red for both patriotism and ease of identification on the table) and the mines from the tops of a set of beach defences and here you have them.  Dead pleased with them :)

So, time for a group shot of where I am now (with some extra work done since this to the katyushas) 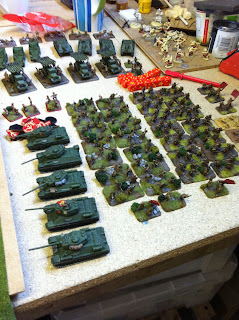 Also shown here are the finished SU-122s (just don't have them here to photo!) and the two things left to do, the SU-57s (which apparently weren't re-painted from the US colour that they were shipped in during the war) and the 4 bases of AT rifles.

So, having gone from 18 painted bases to touching distance of 1500 in a few weeks - really enjoyed being motivated to get it done and looking forward to getting them on the tabletop again as soon as children allow!
Posted by JamieM

How have you found the time?

It is looking really good mate and those sapper units are inspired!

This was almost all done when only child number one was around - things haven't been nearly as quick since family expansion!

There have been some bits and pieces though, so hopefully another post soon.....

Well I have to say Urn that the tanks are faaaantastic!!

You must let me know in detail how you achieved this finish!