Velc-Jenn Craftworld appears from the darkness of space

Not sure it needs saying but I'm a nutter.

You'll have noted, possibly, my lack of posting and truth to tell I've not done any hobby stuff for at least 6 weeks possibly longer. Massive hobby slump right now.

I have completed a whole host of PS3 games but that's not really helping to clear the shelves now is it??

Now I'm someone who builds and paints to a deadline. If I set myself a target I find I get motivated and can crack on. In the past this has come from attending tournaments but as they've become less I've kind of dropped off the painting radar...

Until now. Sat on my shelves are parts of a new Eldar army: I've always had a hankering to do an Iyanden Ghost Warriors army and now I needed a target date. What better than a 1250 tournament at the end of January 2014 I hear you ask? What indeed.

So that's my target. A brand new 1250 point Eldar army by the 26 Jan 2014. Now that's a challenge and at least I know what I'll be doing over Christmas! All I need to do now is work out a colour scheme, buy some bits, build it, paint it and learn what the rules are. Easy right?

Here are some of the boxes on Sunday (Day 0): 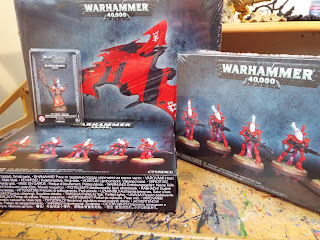 And here's what I have built as of end Day 1 of the challenge: 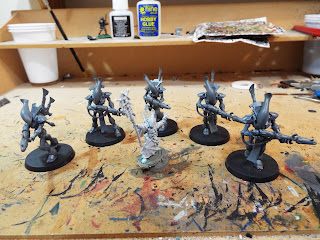 So that's 1 squad and my HQ built. Don't get me started on the superglue + finecast excitement involved with the Spiritseer: if you look closely you'll see greenstuff acting as the holding material...