Painted infinity figures - something of a turn up!

Infinity is probably the only game we've played a few games of with untainted figures. Why is that you ask? Because painting them scared both Eddy and I. Scared us? Yep, the sheer detail on the figures and "true" scale were a bit intimidating to people more used to painting 80+figures for an army where the overall effect is more important than the detail of the individual figures.
But I eventually decided just to go for it :)
GW glaze yellow helped with the armour (with seraphim sepia worked into the joints to keep the armour colour fresh but still help define it. Lots of relatively muted colours and highlighting for the other parts and here we have it, my first five figures and I'm jolly pleased with them :) 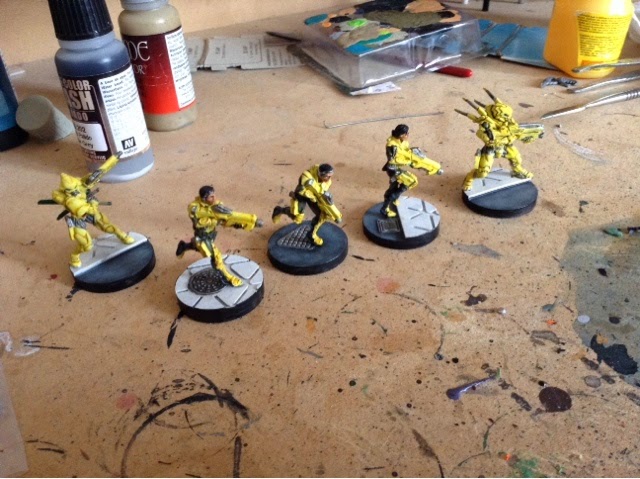 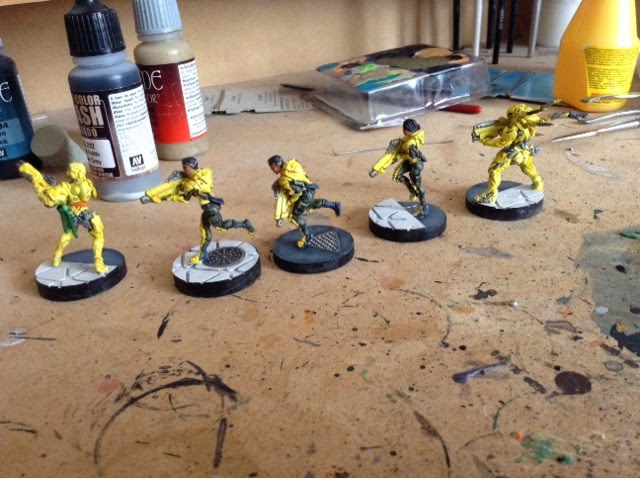 Very nice! Where did you get those bases from?

Do I get bonuses to hit the brightly coloured armour??

Help me out here Urn - Nomads?

And Eddy judging by the report Urn gave of the last game where you wiped him out in turn 1; I suspect he's hoping you'll get negatives due to the brightness of the yellow.

Sorry for the delay in replying Lee, been away - the bases were from Atenociti's Workshop. i dont think they do these triangle bases any more, but I've recently picked up some bases with hexes etched on instead.... as we all know hexagons = the future :)

I thought they looked like Antenociti's stuff (the drain covers are identical). Indeed, all of my Infinity models are on bases that have hexagons on them!

Yep they are AW bases, I have the same ones.

Did everyone do their army yellow?