A rather special gift - Horus for Hope!

Every year I take part in the "Analogue Hobbies Painting Challenge" (AHPC), which sets wargamer against his lead pile and awards points per figure/tank/otherworldly monstrosity painted.  Simple as that.  The camaraderie engendered by the challenge is a great spur to keep productivity up and entering it the last two years has done more to reduce my unpainted pile than anything else.

One of the fun things that is encouraged is the setting up of side duels.  A gentlemanly/ladylike agreement to see who can paint the most of a certain era and the winner receives a painted figure from their opponent.

Last year I entered into a duel against Greg from the "Fawcett Avenue Conscripts" blog to see who could paint more 30k Heresy era figures in any scale.  Now Greg's painting level is amazing and he can really churn through the figures, so I expected to be soundly trounced!  Fortunately, the butterfly curse that affects all gamers hit Greg in the middle of the challenge and he started painting Team Yankee figures and tanks and so I managed to win the challenge by painting more Wordbearers than is probably healthy.... When it came to name my prize I asked for a delegate from the Sons of Horus to go to war alongside the Wordbearers as I was very impressed with the Sons of Horus figures Greg had painted for the challenge.  So without further ado, here he is 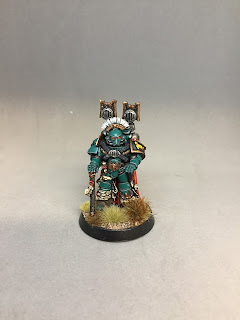 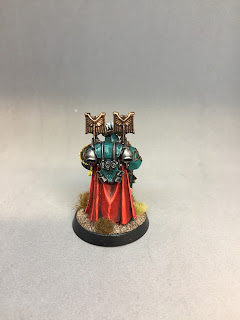 My plan is to either use him as part of a command squad (Horus having sent him to keep an eye on the fanatic Wordbearers) or in smaller games as a medic for my large tactical squad as the encouraging words blasting out of the vox casters ("Horus for Hope! Horus for Hope! Give me an H.... Give me an O....") will do enough to lift the spirits of the wordbearers to see them fight on, even though greviously wounded in body.  Here he is with his intended squadmates and Chaplain 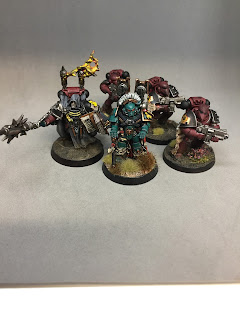 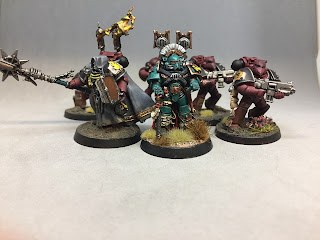 Unfortunately this chap drop podded in a little late from the Wilds of Canada Prime to join my recent trip to Warhammer World with the Wordbearers, which was a fantastic trip 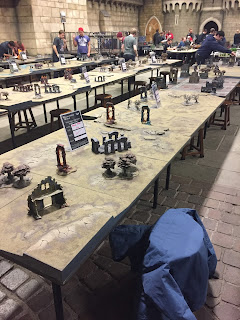 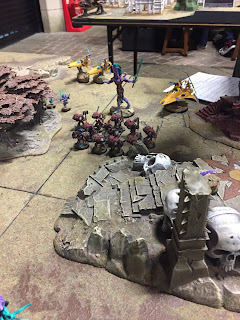 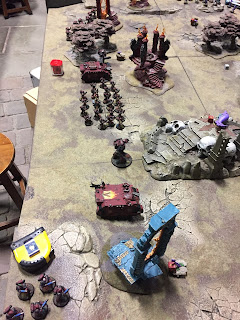 He'll definitely be going next time though.

Oooo he is nicely done isn't he.

I'm thinking that it might be nice to ultimately have small detachments from the all the different legions which we've not actually collected.

which would eventually lead to more full armies :)

Too true! Spending £200 for some new units so you can use the one unit you've bought always seems like a good idea for some reason......

Thanks for posting this Jamie! He looks pleased to be on assignment with the Word Bearers. I hope he makes a useful contribution to a greater understanding of the "correct" version of events which occurred in the Istvaan "incident".

I'm looking forward to the resumption of our paint dueling this winter (apparently 15cms of snow are inbound this week to put me in the mood). I can attest that small detachments from all the different legions is at once a great and terrible idea - I'm already working on three of them, and two new ones are set to emerge in Curt's challenge this year...