Yep, as the title says, I actually painted some miniatures!  These are for my fledgling Dark Elf army for Age of Sigmar, which is actually more fun that I initially gave it credit for.  Having played a game or two, I promptly went out and bought a metric tonne of figures for it, showing my usual levels of restraint when a new game appears on the horizon.... First up is the bulking up of my Spearelf unit to the maximum 40 elves, because if you're going to go, then go big 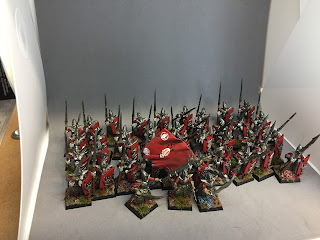 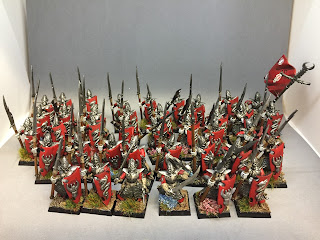 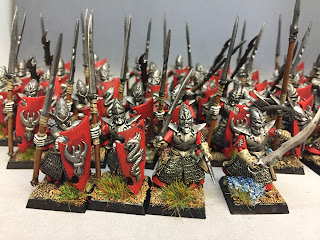 Nice and simple red and silver colour scheme and quite an imposing sight for their enemies.... I've stuck to the square bases (don't judge me) as most of them were already on square bases and this means I can always use them for other mass battle games should I feel the need.  And GW are even faffing around with basing for 40k ("use whatever feels appropriate") so I'm fairly happy they won't ever become unusable.  And I get points for being old skool.

Alongside them go the first of my entirely new units.  This is a unit of 20 Xbow elves.  I picked the models up from ebay and some of the helmet crests have broken off..... but I actually think I prefer them like that so I may have to break the rest of them to match. 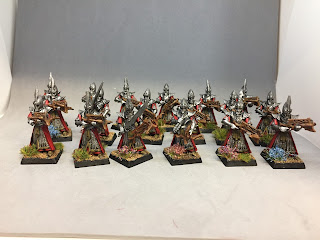 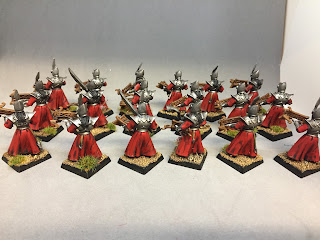 More red and silver to keep the theme going.  The eagle eyed amongst you will note only 18 in the photo.... the standard bearer still needs a decal or two and one of the Xbow elves needs a new magazine so they're still loitering on the painting table.

Next up is a couple of heroes to lead them into the fray.  These were a rather special and very unexpected gift from the BFG after I gave him the Stormcast Eternals that I'd got from the starter box and so I wanted to get them painted up quick sharp 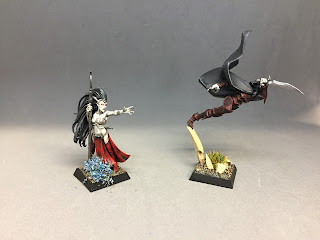 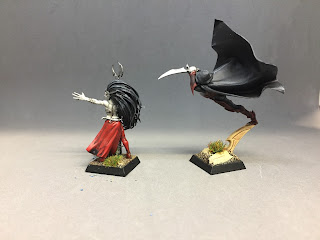 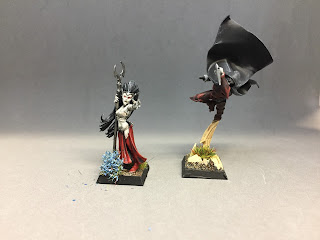 In the new rules, the sorceresses are the main leaders of the troops ( a cynical gamer would suggest that this is due mostly to the fact that GW don't have a fighting leader not on a dragon in their current range.....) so she was painted red and silver to match the troops.  The assassin was really rather good fun to paint and I'm pleased with the muted red armour and highlighting on the black cape.  He may eventually end up on a larger base to stop him toppling over in a light breeze though!
Posted by JamieM

They look great Urn. I really should get cracking with the Saurons.

Do I have to prep an army for AoS now?

Why yes, yes you do.

I have this one in the go and another three armies to prep and paint. Perhaps unsurprisingly!