The desire to embellish my city buildings for PC was always there but the execution was the sticking point. I was worried that I might ruin what I’d done so far and correcting areas when they’ve been dry-brushed is a real pain.

Urn kindly printed me some coloured graffiti onto transfer paper as it was my intention to use those to add some character to the buildings in addition to the posters that were going on. However the transfers just didn’t cut it and ended up being mothballed.

My fall-back position was to use the same technique used recently for the corpse outline. Good old tracing paper and pencil. FYI….it works a treat for graffiti! I’d printed a load of designs onto paper and it was simple matter to transfer these to the buildings. I choose a “less is more” approach as I could have covered the buildings in graffiti but I thought that would end up looking a bit too cluttered and I am only shooting for a touch of character not gritty urban realism. 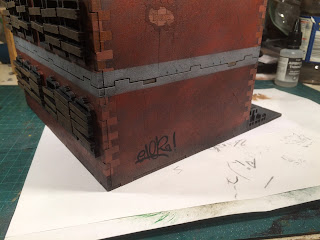 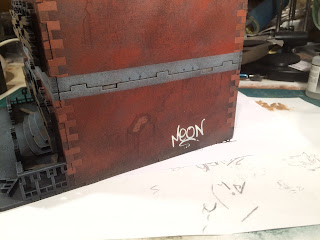 I also wanted for the graffiti to reflect some aspect of each of the pieces. As such I found something that I thought would be the sort of thing cheeky street artists might choose to add to their improvised canvas. 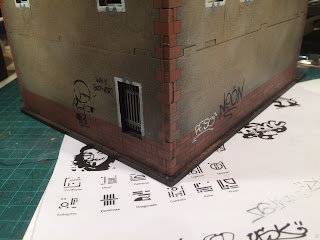 Marvin hanging around at the back of the comic shop. 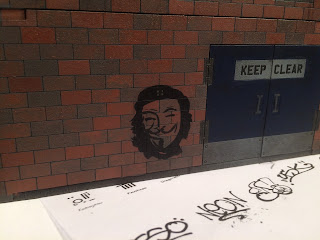 A Fawkesian Che Guevara seems suitably anti-establishment enough for the side of the police station. 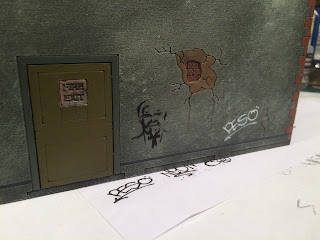 Someone would seems to prefer KFC! 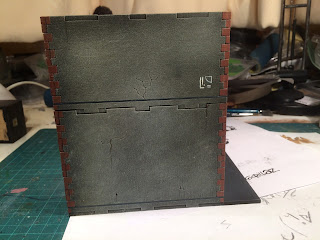 Can you name the film?

There were a couple of other ones but these were the main ones and I was quite pleased with how they turned out especially as the stencil style ones transferred fairly well and remained identifiable. Well, I think they are! 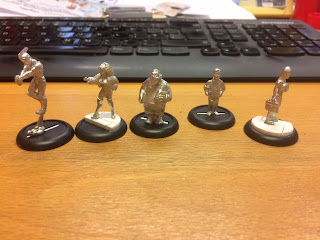 A few more figures prepped for Superhero gaming today and this evening I will be turning my attention to adding the posters to the buildings and varnishing to seal them and the paintwork.

That graffiti looks the business!