So what do we still need?

With all the work that I've been doing on the city terrain I've come to a point at which i wanted to take stock of where I was at with it all.

With this in mind I decided to put out the set as it is to get a feel for what it still needs. Alright....I really wanted to play with my toys. 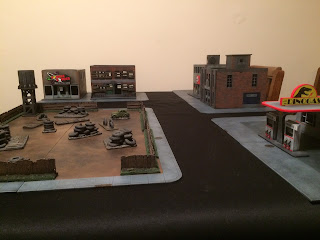 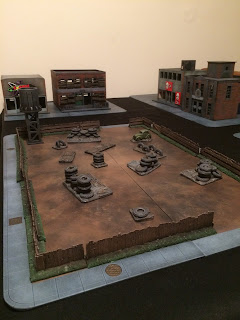 It all looks a bit barren at the moment so clearly in need of more to bring it to life. I want to see if I can find a good source of lamp posts and street furniture such as phone booths, bins and mailboxes. I have a few vehicles already to add which should make the roads seem less empty and the road works will help with that as well. 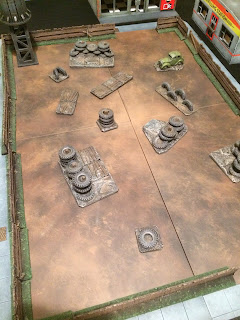 The scrapyard is also looking sparse at the moment as it is crying out for some battered cars. I have a plan for those but it is usable in its current state. It needs more but I must be careful not to over clutter it as that will restrict its usefulness during games. 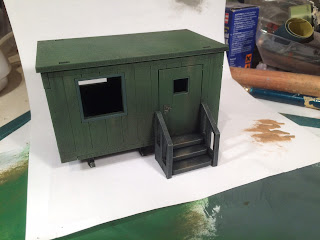 After my quick play I knuckled down to painting again. First up was a much needed addition to the scrapyard, the site office. A small kit from TTCombat, the Portacabin fits in well as being the type of mobile prefab that would end its useful existence as home to some dodgy scrap merchant.

It has been weathered with brown and black washes but I think the mdf drinks those so I think I'll break out the inks to make the weathering darker. Urn commented, when seeing a picture of it, that it needed something more and I think he is right. Needs roughing up a bit. I think a bit of dirty brown sponged on will provide that look/ I want to add some graffiti to some of my recently completed buildings and this will be the perfect tester. I couple of "tags" on the back in the form of transfers will hopefully complete the ruination of this once fine cabin.

I've had a mind to add some posters and extra decoration to some of my buildings and Urn has kindly done some colour printing for me of some pictures I've gathered from the internet to add flavour to all these kits. I have been having some trepidation as I really didn't want to end up making the buildings look worse by having some badly applied paper wrinkling up on their sides and looking a bit naff.

I made the decision to try to use some varnish as glue rather than PVA and last night I got the chance to do a test piece to see if it would work. I used Vallejo liquid Matt varnish and applied a smooth moist coat to the piece of wood and applied the poster straight away. I then immediately brushed over the piece with the varnish again making sure that all of the paper was smoothed down and covered. It was set aside to dry. 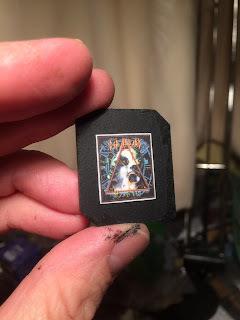 I'd been worries that it would still curled up or wrinkle but I could not be more pleased with how well it works. This will be the technique I use and I'm now rather excited to add bits to my other buildings. It will mean that any surface which gets a poster will have to be varnished completely but this is fine as I had planned to varnish them all to try and keep them in good condition.

I've not had a great chance to get much hobby stuff done at work over the last week but I have started on getting some more figures prepped for Pulp City. First up.....umm....yeah,..some hookers. 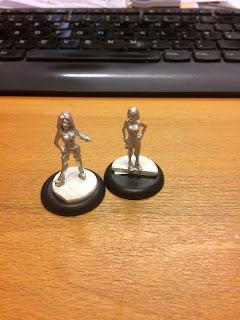 I have more respectable townsfolk to add! I promise!

I wouldn't worry about wrinkled posters - they're a bit tatty in real life too.

I can't wait to see some of your Pulp City gaming on the boards. :)