Now I've got a gaggle of buildings I really need to get the base boards done to tie the buildings together on the table.

With that as the goal I've started working on them. First off was the cutting out. Pretty straight forward process to cut the 9" by 12" board sections. After that it was a simple matter of rounding the corners and marking out where the pavement stones were going to be etched in. 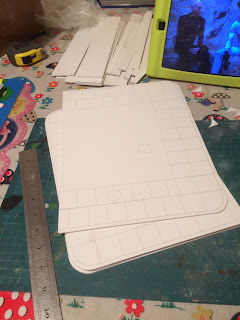 Given that there are twelve boards this job took a while but wasn't as tiresome as the etching. This foamed plastic is pretty easy to carve and etch but after a while it is telling on the hands. Two nights worth over the weekend got the job done and I was pleased to see the back of that part. Also etched in were the drain inlets on the sides and the manhole covers. 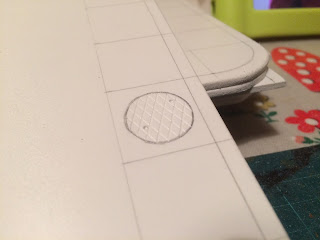 These turned out to be easy to do and I'm hoping that once painted they will look really good.
I've kept the design of the boards as modular as possible to give lots of flexibility in their usage. I suspect they'll be a bit swamped by the fire station but if it proves to be too large I can always cut some more boards to suit any buildings that look over-sized on them. 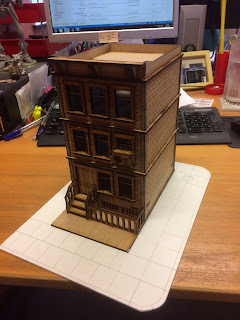 If they work out as intended I'll be able to leave spaces between the buildings as alleyways. Monday night the painting started with each of them receiving a coating of Vallejo black primer. It is a good paint that holds well. A pretty unspectacular stage but it was important to make sure the primer was worked into all the etched lines. 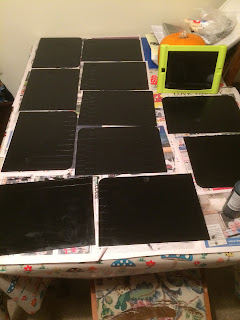 With the black down as a foundation I got to work last night on the grey to bring the pavements out. Lots.....and.....lots of dry-brushing but again....worth it in the long run. 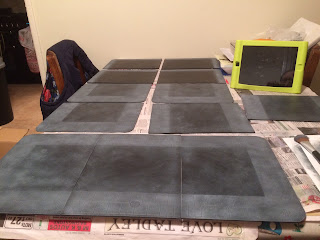 One shade of grey all over and then the pavement portions masked off and given a dry-brush of a lighter grey to make them stand out better. The four boards with large sections on black still on them will be the scrapyard and the black sections will be receiving a mix of brown paints this week. Also still to do are the drain covers and manholes which I'm going to pick out in bronze and then dull with multiple layers of black wash. I am excited to an unwarranted degree at the prospect of painting the manholes. I do not know why!?!

All the boards will get a coat of matt varnish to protect them but I am umming and arring about a coat of army painter dip first to add a touch of colour and the extra protection of the thicker varnish.

I'm looking forward to setting up some buildings for a group shot of them once complete. I think I need to turn my mind to a bit more street furniture like lamp posts, bins and bus stops. Stuff to add a bit of extra cover on the street. I'm also tempted by some of the TTCombat resin sets that would look great as alley junk.