So with the main buildings totally finished for the city set I can turn my mind back to padding out the city with extra bits and progressing the stuff for the docks. So over the weekend I got to start painting the scrapyard office, the dock crane and three billboards that will sit nicely on top of the buildings. 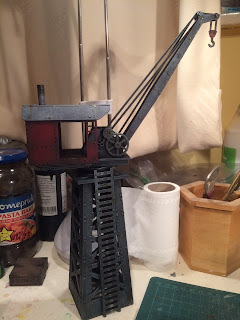 They were all fairly quick and straight forward to paint and I soon found myself on the embellishments. The Scrapyard office will be pretty heavy with graffiti and there will be some on the billboards but in my mind neither are places that would attract fly posters. The crane is getting neither graffiti nor posters as it just doesn't seem to fit visually for me. I haven’t painted the graffiti on the advertising boards yet but I am hoping to do that tonight as well as put on the billboard posters. Given the warpage of the prints, I am of a mind to cut the big posters down into equal sized bits much like the real thing. Hopefully that will cut down on wrinkles. 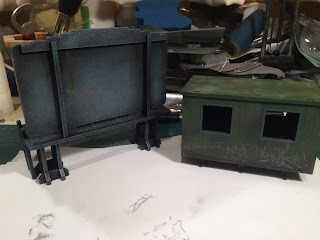 It has been pointed out to me that the little office needed more weathering and last night gave me the chance to do that whilst I did it for the crane and billboards. 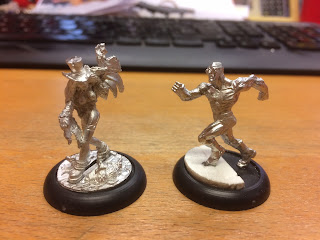 I’m still plugging away at the heroes and villains for Pulp City on my lunch hour.

That crane is smashing - can't wait to use it! Now where's the boat? 😆