Quick update to show the Immortals that I got for the Hell Dorado game system at Colours. 10 figures for £15, as they were selling off the old French boxes so I decided that you couldn't really fall off!

Turns out the old boxes were set to be 200 points, which is the recommended size for the game, so looks like I'm all set and don't need to buy any more for it....... Reckon that'll stop me? ;) 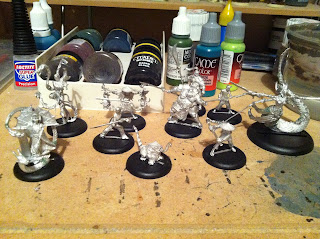 Overall they're really nice little figures. True scale, so tiny little arms and hands which made some of the sticking fairly perilous, but hopefully the super glue will be super as pinning really wasn't an option for most of the joins.

Getting excited about buying these and sticking them together did mean the Pulp City heroes were put to one side, but I'll hopefully be going back to finish the first few of those this week, although I do now need to get some more of the GW wash now I got some good advice on doing the bases from Pulp Citizen.

The rulebook also looks very professional and with only 40 odd pages of actual rules, expect the Silverback and I to be getting in a game at some point.
Posted by JamieM

The Westerners had the same problem with tiny wrist joints to hold a full length sword..... held together with green stuff, spuer glue, some of my skin and lots of foul language.

Nice find at Colours! Shame there weren't any Daemons :-(

I have totally back-burnered my Hell Dorado stuff in favour of PC, MX and FoW.

I had back burnered my hell dorado stuff until this cheap find. I'm still planning on doing pulp first, but a tester game of this shouldn't be far behind.

Read a good post on a blog from somebody saying that it took far too long for them to get this out and malifaux has stolen what chance it had. I suspect they may well be right, but the figures are nice enough that I think it's still worth a go.