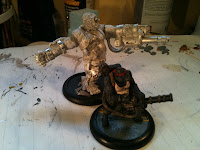 Guerilla reporting for duty! I'd seen the figure behind Guerilla on Westwinds website and decided that I'd have a look at it at Colours and once I saw it I knew I wanted it. HUGH!

Still only a 40mm base but he must be three times the mass of the Guerilla! Want will I use him for? Well I thought he might become an alternative to the Guerilla figure or a level 3 Supreme once some Hero design rules are released. A.R.C. are mising a Lvl 3 big hitter and this fella would seem to qualify!

I would challenge Urn to a game of Pulp City but he hasn't painted any of his figures yet......still.
;-)
Posted by Eddy Artillery

now there is an inside track on some new figures :)

I love the pose of the figure, still a little bestial, just the way fark likes his women!!!!

Level 3s? Plural? Wow, best get those monkeys in line before they show up then. Please see blog post just being posted.....

That new figure is great though.