Look at the Size of my Gun!

Another successful weekend of hobbying in that last week's efforts have been undercoated; and yes swirling winds do make spraying a little tricky.
And the Ranger squad are built!

These guys don't necessarily fit the Khorne doctrine of get close and personal so I'll come up with something suitable later. You get 1 of each of the 3 special weapons per box (Plasma, Arc Rifle and Arquebus) and since I have 3 boxes of Skitarri it meant I had 3 Arquebus all sat there waiting to be used....
I hate to disappoint big guns so my Ranger unit was born. The chap in charge (Alpha) also has a rifle as giving him a pistol and combat weapon seems a waste on a unit with 30" and 60" range guns. If these get in to combat then something has screwed up. I expect they'll end up in combat in their first battle knowing my luck!! 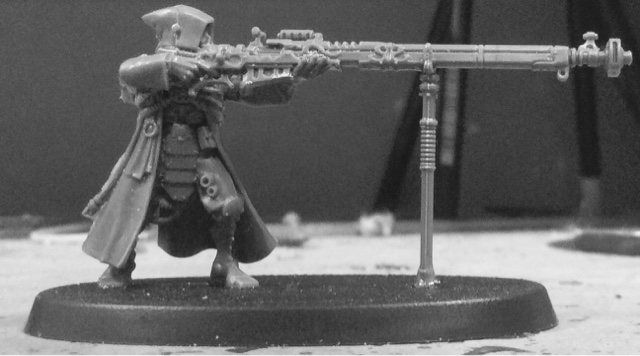 I really like the fact these guns are sooooo long that they need a stand to hold them in place.
Just for the record these boys are BS4 (not counting their doctrines) and the rifle held by 7 of them is a 30" Rapid Fire, Precision Shot, Str4 AP4 thing. The Arquebus is a 60" Heavy1, Armourbane, AP3 Sniper rifle. Oh and these boys are relentless so that Heavy1 doesn't matter.
Next up: Building a Dunecrawler Walker and starting to paint the test Vanguard figure.
And more importantly: I'm having a lot of fun again!
Posted by Von

Great to hear you're enjoying it all again!

Von got his Mojo back!

Well this blog has been running for a few years now. It has gone through peaks and troughs of activity as real life forces our collective hobby time to take a back burner. But we are still here and working hard.