I've tried to kick myself back into gear at home in the evenings to get my Horus Heresy stuff done (hmmm probably should do some blog posts about that as well) but I've also tasked myself with being a bit more productive at lunchtimes once again.

With that in mind I am going to try and bring Dystopian Wars to the table again in 2016. Not naval warfare this time as I'm not sure that it really caught our attention that much. However I've always had a hankering for a game with lots of iddie biddie tanks and the land based DW stuff is just the sort of thing that flicks my switch!

My Kingdom of Britannia land stuff sits at home all put together, based and undercoated and I fully intend to get some serious batch painting done, after a chunk of the HH stuff, to get a sizable force table ready. My lunchtime aim is to get the Prussian Empire forces, which I seem to have a lot of, to the same point so I can do the KoB and move straight on to the PE. These things aren't complicated builds and the Spartan castings are usual top-notch so they don't take long to prep. 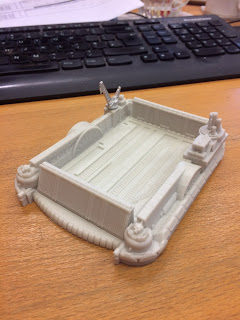 I painted up some smaller landing craft a couple of years back and I'd picked this one up cheap as I do have the hope of doing a beachhead game at some point. 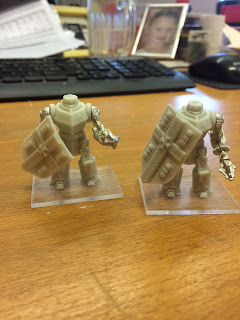 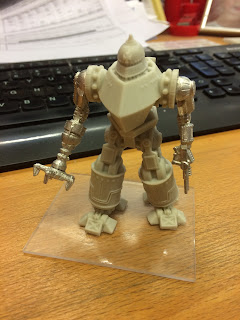 Some even bigger clanky fun! The dreaded Metzer! The robot bases need texturing but then they'll be ready for a spray. 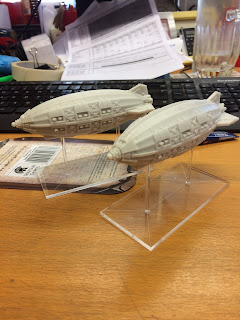 Two of the six Zeppelins that I find myself owning. The others are a bit smaller but a nice start to my airbourne floatilla.

Mobile airbase (Huge monster!)
Loads of tanks of various sizes
Some more robots
and some planes.

It might be a good idea for me to cost out the points for both the Kob and PE as I suspect the plucky Brits might well be outnumbered and....hey..I need an excuse to buy them some more air support!
;-)

I brought some 6mm buildings a while back and the scenery maker in me is screaming to start that. I've got all sorts of ideas about nice contoured pieces with little lane and hedgerows. Can't wait.

But i must wait.

Until I've finished a big chunk of my Heresy painting.

Too many toys and not enough time to play with them!

I love all this stuff. Especially as you'll be doing all the painting and we can just turn up and through loads of dice! 'Coz I'll be able to resist buying any myself once I've played..... Right?

And the first game better be against the fsa I just brought.