I'd thought painting the run down apartment block might have been a quick and fairly easy job but ultimately be a bit dull with drab colours. However this project has unfolded in a way that I hadn't expected. I always have a partial idea on general colours to be used before I start but I'm pretty fluid until the paint is actually applied. The red I ended up using on the walls was darker and deeper than I'd intended. This was due to the pot of terracotta I'd planned to use having all dried up!

But I am glad this has occurred as the deeper richer colour should stand out nicely among the other brick buildings whilst still being of a similar appearance. 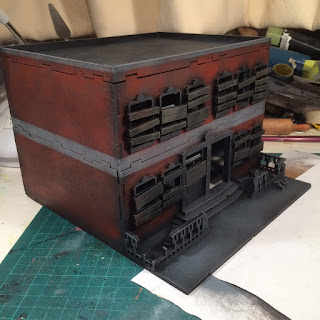 I've picked out the etched banded detail in grey but this needs a touch more work as there are additional details that'll need hand painting to get them to show up. The removable first floor has had some drybrushed browns but was lacking something until I used a watered down sepia ink which intensified the colours that had been looking too washed out. 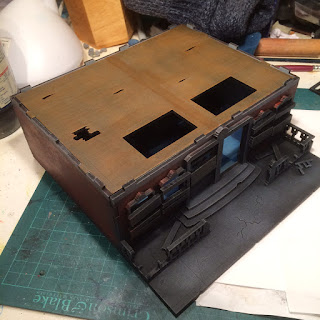 I suspect this is where the outline of the body and blood stain will end up being as both will show up nicely against this colour. Downstairs got the tiling treatment. I'm pretty happy with this but I think for the petrol station tiles, probably my next project, I will go for a black and white tile effect. 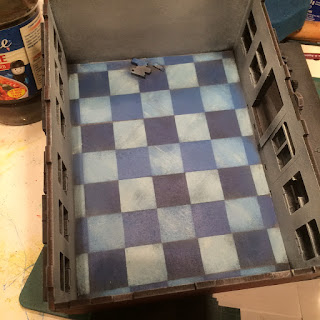 I still need to do the brick trim, planking on the windows, broken bits on the floors, address some of the other details and do some weathering but there really isn't that much more to be done now.