Progress from the weekend

I haven't rested upon my laurels this weekend but I was more involved with getting things built than painted. The Fire Station from TTCombat has been eye-balling me from the shelf in my study and I finally caved in on Friday night and put it together.

As with most of the TTCombat kits I've made so far, this one proved easy to build. The main body of the building went up within two hours with the windows fitted. On Saturday the grey card trimmings went on with equal ease. 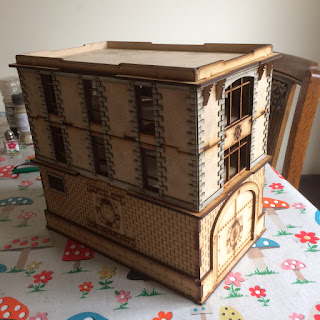 I'm looking forward to painting it but can't quite decide if I want to do the brickwork in a sandstone colour with red upper walls or pale walls with red brick detail and trim. The Red brick would fit with the buildings so far and would be nice and colourful so I suspect I'll go for that.

I have to add that there was a cutting error on one section of the kit that I reported but then I discovered they'd actually included a whole spare sheet to address it. The really impressive bit was that I sent the message at 21.48 on a Friday night and got a response within about 15 minutes checking if I needed replacement parts. Good Service!!

After that I got back to painting the Petrol Station. I've dry-brushed all that I can now including some colour on the outside and I've come to the slow part of painting in all the etched lettering. On the most part it is so crisply etched that it isn't a particularly hard job just time consuming and surprisingly enjoyable. I was expecting a mutter-fest of hasty brush swaps to correct mistakes but on the whole I kept in within the lines! 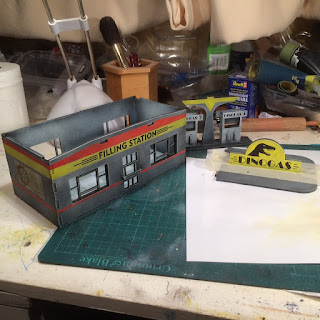 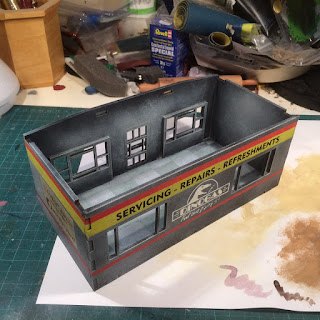 Tonight it'll be finishing the red trim details and, if a I get time the petrol pumps which need a few bits picking out. Looking at the pictures they do need a bit more colour on the body of the pumps as well. A bit of red methinks.

I've done a bit more tinkering at work on the TTCombat container ship. A hulking model and pretty easy to construct like most of their stuff. Just the main bridge window to finish now and I'm thinking of adding something on top of the bridge like a rader.

This thing is about 75cm long. Its a WHOPPER! I haven't actually joined the two main sections together as I suspect that would be a total pig to paint as well as being a pain to store. 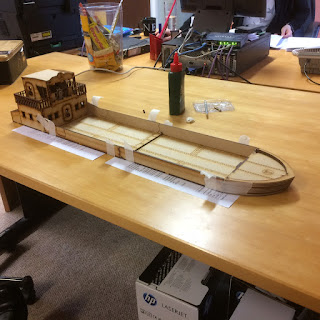 That service station is the business!

Really good effect with the drybrushing and bright colours. Thenmuted floor inside is grand - wish I had the patience!