Clash of the Eldar and Imperials

Game on last night, 2,000 pts a piece saw an alliance of Imperial Guard and a Shrike like marine army (Varistat

and The Silverfox) take on an Eldar army (Eddie Artillery and The BFG).
The mis

sion was Dawn of War and Annihilation, the Imperials decided to go first and the Eldar decided to leave everything in reserve.
The Eldar raced on to the board on turn 1, here is a close up of the battle line with a refused left flank being the order of the day. We could see the

Imperial lines arrayed in front of us, with the Vendetta on their right flank and a Leman Russ on their right, we agreed that the whole army going for their right would mean that some of their fire power might be out of range. As it turned out, the only thing out of range was their la

sguns. The Wave Serpent carrying our Howling Banshees raced forward and took some heavy 4 shots at the Vendetta, this caused a Stunned result on the glance table, great we thought, that will be out for turn two! The rest of the Eldar forces tried in vain to penetrate the Landraider carrying 6 assault terminators and a Chaplain in Terminator armour, well we had to stop that right?
On our far right we had a lone unit of Pathfinders, which sprinted into c

over, a 2+ cover save would ensure a good de

al of winkling needed to get them out!
Turn 2, we all agreed was pretty much a non event for both sides, lots of missi

ng and wailing and gnashing of teeth, none of the reserves turned up...the only thing that happened was the Avatar taking a wound from a Lascanno

n. Oh ans the fact that the Silverback called for an update and reiably informed us that the Vendetta had "extra armour" so the stun became a shaken! :-(
Turn 3, now this was a different kettle of rippers!! All the Imperial reserves an

d ours turned up! Shrike and his assault marines moved on to our left flank, eyeing up the Striking Scorpions and Eldrad....Sly Marbo appeared in the building in front 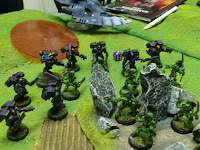 of the Falcon and Dire Avengers, just as they had dismounted from it the turn before, he threw his demolition charge, which scattered a mighty 5" on to the poor assault marines with Shrike, killing 3 of them....ouch! So at this point the Guard had killed more Imperials than we had.
The Avatar took

another 2 wounds and the Wraithlord was destroyed by a hail of Lascannon fore and the battle cannon of the Leman Russ Battle Tank. Ooh I almost forgot the chimera mounted vets that roared forward, de-bussed and opened up with some real nasty rapid fire!!! No overheats and 2 dead pathfinders later, they broke and fled the table!! 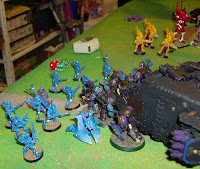 Sheesh, not looking good! The

Termies assaulted the Guardians in our deployment zone from their Landraider and wiped them out!! Followed by our deep striking Spiders gunning 1 of them down in turn! That's okay we doomed them and we'll get the Avatar to exact vengeance....The falcon was destroyed as well and all the shots that the avengers put in to Marbo were saved by the 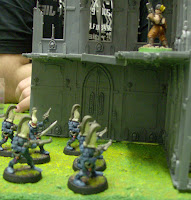 cover, assault led to the avengers losing the combat and just hanging on!
Shrike leapt ino the Scorpions, which were in cover, Eldrad waded in with them and the result was a win to the Scorpions with only Shrike and a lone marine left! Well something was

looking up, our wraithguard could toast the Termies before the Avatar got into them as well...... The Assault marine finally went down to Eldrad and the remaining Scorpions, however they did take four of the little green arachnids with them!
This turn also saw the poor 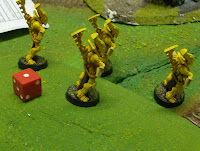 wraithguard roll a wraithsight failure of a 1, leaving them flat footed in front of the Termies while the wave serpent carrying the Banshees got im

mobilised! That's okay the Avatar would deal with the Termies.....bloody invulnerable saves again! Ours didn't work though...sadly!
Turn 4 the Termies assaulted the poor inert Wraithguard and wiped them out, then swept on toward the Scorpions with Eldrad! The spiders suffered a deluge of fire and got all wiped out bar the exarch! Marbo drew the ongoing combat in both rounds! The scorpions and Eldrad assaulted the Termies and lost the combat, poor Eldrad rolling double 1 for wounds! With hind sight I think

ttered as they were making a lot of those 3+ inv saves....damn those storm shields!! the termies killed everyone except Eldrad! Our Falcon was also destroyed by one of the staunch guardsmen manning a Lascannon....it's not looking good!
Turn 5 Marb 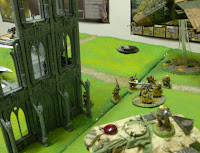 pider Exarch was sniped by some vets that had done the Pathfinders! and Eldrad succumbed to the storm shield thunder hammer combo!
Our only last ditch effort was the Dire Avengers pouring a "Bladestorm" into a platoon of Guardsmen, killing 3 however they held fast!
I'd love to say honours even but 8-4 on kill points doesn't cut it! Good win to the Imperials...well done Varistat and The Silverfox, commiserations to the BFG and Eddie Artillery.
Great game and a real, real laugh!
Posted by BFG

If you look closely, you can see the extra armour on the Vendetta!