Well it all started on a wind swept snowy Friday morning, we weren't even sure we'd make it.....thankfuly we did and the first real GoG doubles was underway at the celebrated Games Workshop HQ in Nottingham.
Unfortunately one of the crew, Varistat, had to give it a miss as it would have mean't leaving his poor expecting wife in a snow bound house for the weekend, so our chivalrous companion gave his ticket up.....she's worth it though!

Well the trip up was really easy, both Eddie Artillery (EA) and the Silverback (SB) were in fine form and once we got above the M4 at Newbury the snow lessened, so we made good time there with a quickest ever time. A good omen for the weekend we hoped! Well until we realised that we were too early to get in to our hotel, so had to go across to the pub next door for half an hour, couple of pints later then it was over to Bugmans for what turned out to be a right ol' session! by 23.00 we were rolling around on the tow path by the trent rugby tackling each other and rolling in the snow and ice like a bunch of loons!
Saturday morning.....my God what had we done, EA looked like the snow and SB had to be revived from the dead to go to GW....it was the longest mile we walked!!
Signed in and a bacon cob later, followed by 2 pints of orange juice and lemonade and I felt fine, Nat was a little better....not so the poor SB...we'd broken him!
The First game, up against two great fellas Alan and Steve, a combined Marine and Imperial Guard force.
The key to the battle was Capture and Control and Dawn of War, our opponents made a bold move in the initial stages of the game rushing their two devil dogs across the board while their close

The game was won by the efforts of these Terminators and the rush of the Ironclad Dread which contested our objective while their guard defended theirs!

The Banshees tried to stop the Termies to no avail....it was a tidy win to the imperi

als. There was one moment of note for a valiant Fire Dragon, who withstood the onslaught of 21 to hits and survived.....well until the next round at least! There's also a sneaky pic of the Pathfinders that EA and I forgot to fire with...a number of times!

Great fun game, we needed it as both EA and I repeatedly forgot to do things! Nothing to do with all the alcohol!
A loss for us!

Second game was against Ed and John, Annihalation and Pitched Battle.what can I say another game with

good natured fellas, in love with the hobby and darned tough to beat. In fact EA and I didn't realise we had beat them until we counted up the K.P's at the end of the game.
Here's Ed's Drop pods crashing into the middle of our lines with Cantor, or for this game "Santor" (sorry if I got this wrong Ed!")They did horrible things to our Pathfinders!

John's Landraider rushed forth and disgorged a squad of Terminators with a Librarian in Terminator armour, you might be able to pick out the three figures from the Space Hulk box set!

The Wraithlord saved the blushes of the Pathfinders by wading in to Santor and his marines, while the Assault Marines leapt in to the poor pathfinders, who seemed to be drawing a lot of attention! While the supporting Dire Avengers bore the brunt of the Termie assault!!

Ed had dropped in a second drop pod full of tac marines while John detached his Librarian from the Terminator squad to let them deal with the rampaging Wraithlord.

The Banshees leapt in from reserve in an attempt to deal with this hero of the Imperium.
Which they managed after some desperate hand to hand, then swept off to deal with the remaining Tac Marines from the second drop pod.

We managed to win the game purely by chance really, as we destroyed one of Ed's d

rop pods, as it was in the line of sight! Nothing more!! A win for us.
The last game of Saturday was against Sam and Dan, a wily pair of a Tau and Imperial Guard mix, the mission was Capture and Control and Spearhead. We decided to hold every

thing in reserve as there was a heck of a lot of shootie stuff on their side. The only troop choice we deployed was the Pathfinders, in cover giving them a 2+ save. They would be fine until the army turned up we thought! Well you know what they say about the best laid plans....our army didn't get a reserve unit until turn 3 by which time we had lost the pathfinders, the unit that came on then died as well, turn 4 saw the rest of the army come on allowing us to kill their crisis suits, then the Demolisher and some of their pathfinders. All in all we got annihilated and that wasn't the mission! I have included some pictures of their army for note, I was feeling the effects of the previous night by this time so not too many photos. I was interested to see Sams squats converted for Tau and also have to say that the Psychic Choir proved to be horrible.....well done Dan and Sam. A loss for us.

The next day was a late start as we got our times wrong, we were on GT time and turned up half an hour later than we should have....not having the keys for the car, where our army was stored was a slight disadvantage, personally I think the SB was trying to foil our effort to win the Tournie! LOL!
Forgot the camera, so no piccies, however it is of worth to note the second and last game. The second against Andy and James, Pitched Battle and Seize Ground, these guys hadn't even owned an army 4 months previous and I have to say they put up a very spirited fight, Andy had a Dark Angel (DA) army while James had Sisters of Battle (SoB), the DA's charged in to the fray with a squad of Terminators deep struck in to the thick of it! Destroying our Warp Spiders! in turn our Banshees got the termies with the Chaplain.
On my side of the table the Sisters stayed in their rhinos with an Immolator in support, holding one of their objectives. I traded shots with the Exorcist, only managing to stun it for a couple of turns while the Wraithlord and Dire Avengers succeeded in killing an entire SoB squad followed by the HQ! we finally contested their last objective, holding ours with the Guardians and scuttling forward with the Pathfinders to claim the middle one at the penultimate turn of the game. A win for us!
After lunch we got drawn against a couple of Bristol veterans, Andy and Nic Taylor (Tailor), now this was an army combination that I wished I'd got my camera for! The Tau that Andy used was exquisite while Nic's Eldar was a work of art!! Fantastic! This is why we do these things if you ask me.
Through some twist of fate Andy and Nic's armies didn't make it to the best painted, which is a bit of a travesty!
Great game, all a bit of a blur, with most of our army getting stuck in early and fairly mirroring the Eldar of Nic's force. The Tau kroot infiltrated along with their Eldar Ranger partners! The rest of the armies being deployed on table, the mission was Spearhead and Annihilation. My memories of this was Nic exclaiming loudly that I had "penetrated her on the table" which I have to say made me blush.....the rest of it was all a lot of laughs and rolling of dice, that's all my remembrance of the game..oh and that we lost 10-6 in the end! Faaantastic game!
I have saved the best painted til last and got all the ones which were my personal favourites!

The Dark Angel and Elysian drop troop guard army won, while the Mehchanicus army didn't quite make the final, I liked it!
So in no particular order! 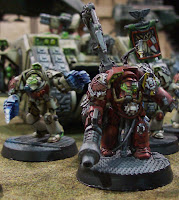 This nice Space Wolf and Deathwing combo drew my attention due to the clever use of Termies as troops and two Landraiders with a couple of mean characters!
Next up the Drop Troop Guard army and my favourites the Ogryn!

And the Ravenwing arm!

In my next post I will draw attention to the Eldar and the Mechanicus army, which was deployed as a Chaos Demon army!
Posted by BFG

Were we there on Friday night?? I have no solid memory of any events!

I do however have a fleeting image of the word turning sideways as I was struck by the silverback. LOL - crazy night!!