otic Spores to you and me.....a while ago, while building my 'Nidzilla army, I bought 6 Carnifexes from Gaming Figures, with their discount and great service I was encouraged to go the whole hog! After constructing said monsters I was left with a vast amount of spares! What to do with them, well we're blessed in the GoG's with guys that have a phenomenal amount of talent, one even lends his hand to making models from scratch!
So over to Eddie they went, I thought no more of it. Recently Eddie posted his creation of the Tervigon using various bits from said collection, so they are all going to great use.
You can imagine my surprise when out of the blue he turns up with this superb looking model....he offered that he was grateful for all the bits and that this was a thank you...well Eddie THANK YOU!

It's detailed in Forgeworlds Imperial Armour Volume IV "The Anphelion Project" a great book as ever. It covers a lot of Tyranids bio gribblies and a new chapter for Space Marines "The Red Scorpions as well as the Imperial Guard Regiment the "Elysian Drop Troops".
Basically it's a fast attack choice that has two altitudes for movement and deployment and delivers a huge payload of Bio-acid St 5 AP3 large blast, it also gives 2D6 + 5 against armour....ouch!

A great addition to my revitalised 'Nid army, just need to look at the new codex and work on the rest, my poor 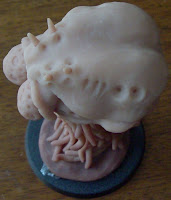 'Nidzilla army is far too expensive as it stands for a 1500 pts army, still....from what I read, there is a host of other options to take now, time to dust off the rest of my 'stealers me thinks!!

Well this is another project, that must go on the list, I need to finish my Chaos Terminators first, nearly there, just touches to the bases and I'm done. Just 1 more Obliterator and a 10 man squad of Raptors including Lightning Claws and 2 Meltaguns........fwaaaaaooooooor!

Some set of bollocks these!

lol, that's exactly what we said whenthe model was handed over!

Karen was there too and didn't bat an eyelid - what wargamers wives have to go through, eh?

She's seen it all before......apparently!