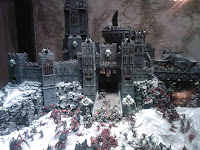 When we trukked up to Lenton last weekend, you know the story by now, loads to drink and hangovers on the Saturday, none of us noticed the "HUUUUUGE" diorama to the right of the entrance to Warhammer World....Luckily the Silverbacks mate Ian offered us the information on the Saturday night, so we got to see it!

All I can say is wow!! The scene is one of a last stand on a world defended by the Space wolf chapter. In the centre there is a procession of marines carrying the incapacitated Wolf Lord across the drawbridge, a squad of Long Fangs pour death into the tidal wave of living chitin pouring up the slopes.

There are loads of little individual dioramas all telling there own tale, just on the right of the first picture there is a Landspeeder Storm being dragged down by a Carnifex, Hormagaunts pouring up and over the monster and on to the Scouts, who are still desperately battling the inevitable.

Out of shot below the Landspeeder is a culvert which Genesstealers have found and are crawling into up the rock face from the river far below!

On the left a similair story with Genestealers crossing the same river, just their heads visible and the 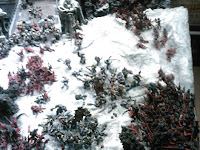 Large explosions can be seen in the foreground of the slope, throwing Gaunts into the air!

On the right down hill of the Speeder a desperate battle unfolds with a Squad of Wolves falling back under assaults from Tyranid Warriors and yet more Gaunts! One image noted was the flexh hooks shooting out from a Warrior into a Space Wolf, who has then grasped these and appears to be dragging the Warrior to him, Thunder Hammer poised to bludgeon the monster.

All together a fantastic piece, the detail is immense, discarded bolter casings litter the snowy ground, along with dead from both sides!

There are all manner of choices from boh Codexes on display and all are in full "lifelike" pose as taken from a still photo shot.

The only down side was that the pictures were taken with my Phone on the Sunday, as I didn't have my camera! :-(