Seclets of the Third Leich (the secret Divine Wind) 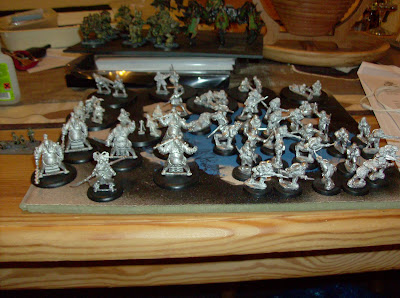 Well I have started on my SoTR force.  Yes all that metal and a complete army for a gaming system that none of us has played, but 4 of us have forces for (one more than others after Santa dropped a Tiger Mecha in someones hold ups).  Anyway, a few minutes searching the West Wind forums the other day burst my bubble of cleverness when I found that the future Sumos and Perry Miniatures Ninjas are commonly used to SotR-ers for a Japanese force.  That said, a kind gent has published some Jap rules so these will now be played as Japaneese, not a quasi Russian/German Force.

I need to texture the base, wait for the spray to arrive in the post and then these are the next to hit my painting table conveyer belt.

In the mean time, I think I will start assembling my next 40K army, or even my WotR force.

Labels: Secrets of the Third Reich

Do you have a link to the Japanese rules - sound interesting!