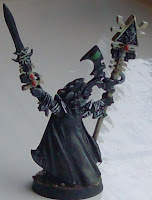 Well here's another timely update, I can never decide when is good to show the next stage, so I am going to put these up as and when time perm

its.
I have managed to add a nice version of the Eldrad Ulthran character which I have been painting for our Eldar joint force games. Originally I bought this figure to go with my Ulthwe strike force, however as that list is somewhat defunct now (see Eye of Terror Codex) I thought it best to include him in my generic Ulthwe force. My intent is to highlight the gemstones with a gloss varnish finish, once the artificial light effect is in place. I'm no expert however I'm gonna give it a go!
Another addition to my Eldar is the AVATAR, the Bloody Hand of Khaine, this dude with the Psychic power from the Farseer "Fortune" will ensure he sticks around for a very, very long time!!

I cannot lay any claim to the paint job as my good friend the Silverback nicked it from under my nose one afternoon recently and then brought it back delightfully painted!! Thank you Sir! All I did was edge the base and texture it. This still looks a little glossy as it's wet, it'll d 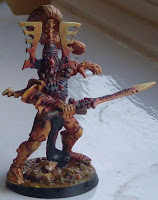 ry a nice matt finish and I may drybrush for effect.
An awesome model, although somewhat small these days in comparison to most Monstrous Creatures, although with True Line of Sight rulings this could be a blessing!

Next off the paint station is the in progress Slaaneshie Terminators from my earlier post, these are coming along nicely I think and once I get the iconography on to the back banners and

shoulder pads this will lend a lot to the finished articles.

First up I have the Terminator Champion, this guy should be a real handful with initiative 5 and 5 attacks the turn he assaults, what's the Gimp mask all about!! Oh well that's Slaanesh for you I suppose!
The heavy weapon of choice for the squad is the Heavy flamer. I was unsure whether I should give the skull shoulder pad a metallic finish, however 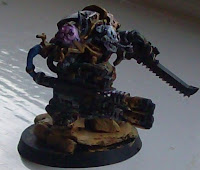 decided the bone finish looks far better...still that's down to personal taste at the end of th 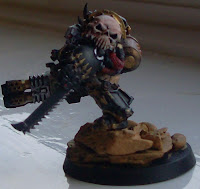 e day! Complete with Chainfist he should be useful against vehicles as well as the hordes!
The rest of the squad comprise a couple of Terminators with Combi-bolters and one has a Tentacle...one of the blessing 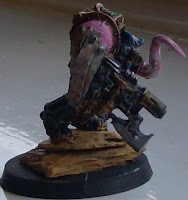 s of their chosen Deity I guess! Th 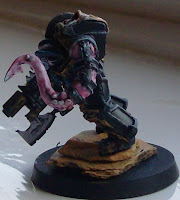 is will also double up as a Chainfist.
The way the tentacle has leather straps adds to the whole feel of the God of excess and pleasure! Or so I am told anyway!
The next Termie has a melta combi and a power weapon, again Initiative 5 should ensure I get the first hit and therefore reduce the am 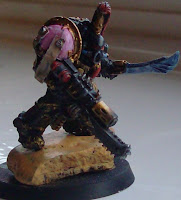 ount of attacks coming back at them! 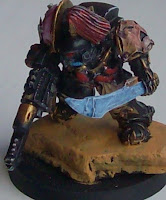 I really like the look of this guy! as he's striding over the rock face, the normal marine head is far better then the huge tuskers as well.

Last but not least another gimp mask guy!! Armed with Storm Bolter (Combi-Bolter) this guy will lend attacks to the champion, hopefully reducing the comeback again!!
Okay I am off to draft a list for tonights 2,000 pts game against the Silverfox and Varistat! Eddie Artill

ery is going to be bringing the big guns and all will be here on the blog in the next couple of days for your delectation.
'til then TTFN.
Posted by BFG

liking the shading on the Avatar!!

Thanks mate, can't take much credit for this, it's all the Silverbacks handiwork.

All looking good. And remember not to fire your meltas at the Avatar - he don't mind them at all :P

Trouble is everyone has Lascannons and Plasma these days...ho hum, the ever changing world we live in!

Those terminators are really, reallu nice. they look even better in the flesh (as ever) and should be a terror on the tabletop!