Well - here it is 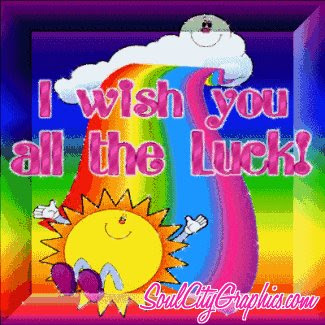 Well we are off to Lenton to take part in our final hurrah at the end of 7 months of hard work and laughter. I wish us all good luck and bon chance, and may the best guy buy the beer.
I sincerely hope we are back at work monday still feeling the effects of the weekend whether they be alcohol, humour or good game related.
I leave you with the age old salute of may all of your dice be double sixes (especially for leadership/faith point tests).
Posted by Silverback 2 comments:

Over the finishing line in a cloud of exhaust smoke 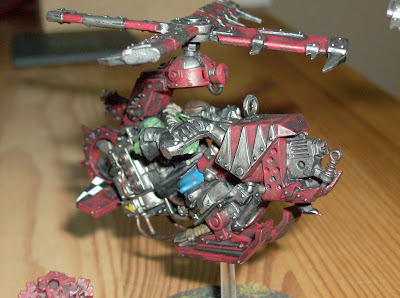 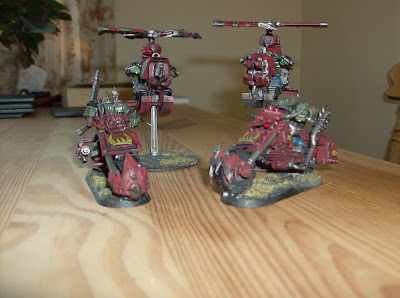 To finish the 1750pts off we have only 4 models. 2 more of those lovely and friendly Nob Bikers to make the squad up to 5 and the painboss. And the last 2 Pardon Koptas, one of which is armed with the permanently overheating Kustom Mega Blaster.

So there it is done.

Well that is apart from the 10 Kommandos with Snkirot, Battlewagon with Kill Kannon, 10 Stormboyz with Zagstruk, Ghazghull and 6 Mega Armoured Nobs, and a squad of 20 Nobs which are on my painting desk. That will leave me shed loads of foot sloggin' Orks, Lootas, Tankbustas and Grots to paint before I achieve my aim of world domination .... sorry that is next week ... I meant to say the ability to field an Apocalypse force on my own.

Now to see if these fine examples of Ork-dom can finally beat my curse of never being able to beat the Varistat........
Posted by Silverback 1 comment:

For March we have...

The final month of painting is upon us and our outing this coming weekend will decide who will win the Meldrew!
Posted by Von No comments: 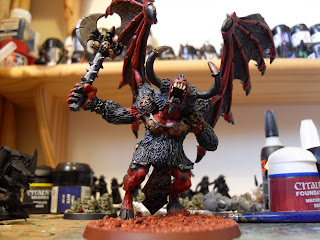 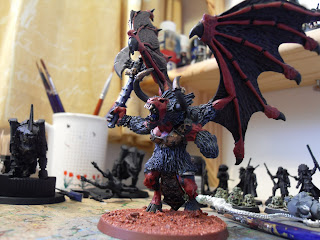 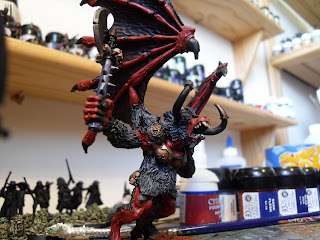 After Vanquish I've decided I need something else big and scary for the GoG Tournie. As we know 1 Greater Daemon just isn't enough so I've raided my shelves of holding and came across a little old Bloodthirster that the wife bought for me a couple of years ago!

You'll note that I seem to have bought shares in the Green Stuff company for this one! Frankly metal (especially big metal) just doesn't go together well so he's had a couple of pins and lots of green stuff to re-inforce him. He's probably the hairiest Bloodthirster out there... 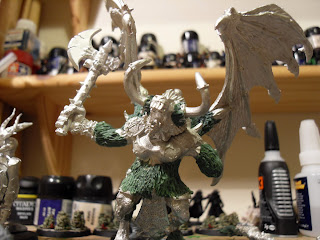 So why Old Stumpy? Let's just say that the left arm with whip was so heavy that no amount of pinning or green stuff was holding it in place so after much thought I decided to run with a one-armed Bloodthirster! That way he can claim to have beaten you with one-arm tied behind his back :-) 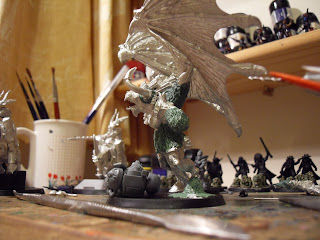 Now to paint him this weekend and next ready for the GoG Tournie. No pressure then. Oh and then have to find some way to transport him!!
Posted by Von 3 comments: 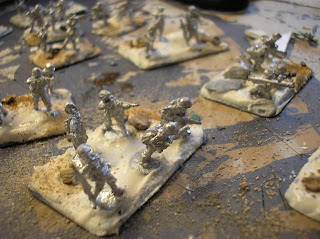 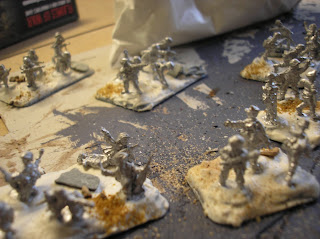 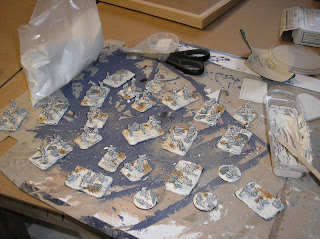 ....Would be pretty tough without troops! So, in order to do just that, I've started up a Grenadierkompanie.

As you're all no doubt aware, I've started up Flames of War and with my brother-in-law Dave taking the Brits, the Germans seemed like the logical choice (and they have all the great tanks too of course!). We're going Late War with the Brits and Yanks steaming in from Italy and Normandy and I'm pretty excited about starting to paint and play in this scale.

As you may know, the little figures come with round metal bases on them and you stick 3, 4 or 5 of them to a plastic base and they're a unit. i stuck mine down and didn't really like the fact that they all seemed to be standing on little islands, so after a quick look at the FoW website for inspiration (and £1.59 at B&Q later) I had some wall filler ready for use to work them into the terrain a little more. And whilst I was sitting there "icing" my 17th base I thought "This is the type of thing we should be blogging about!", so here it is.

Apologies for the rubbish quality of the photos, I made the classic mistake of having too many things in the shot so the camera had no idea which one to pick out! Still, hopefully you'll get the idea. I stuck little rocks and sand on the bases as I'm hoping that'll give me a nice bit of texture for when I come to paint them.

Stay tuned as over the weekend I'm hoping to get this little lot painted as I've told myself that I can't buy any more until I've finished what I've got. Wonder how long that rule will last ;)
Posted by JamieM 4 comments: