The Germans are coming!!! 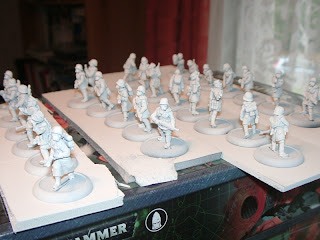 Thanks to the fact that I've managed to finish a few other bits and bobs, I can now get cracking on my Germans for SotTR.

I've finished the zombies (I'll try and get some piccies up soon) and a Vampire. Three werewolves are nearly complete, they just need army dip and basing. Just need to get all the ground pounders done!
Posted by Eddy Artillery 2 comments:

Labels: Secrets of the Third Reich

We built this city on rock and Rooollllll!! Decided to blitz my PE tiles at the weekend having only just got them from VSM on Thursday.

When you're feeling blue....

Mr.Nob with Power Klaw & Bosspole; the only figure in this first mob of 20 that didn't come out of the Assault on Black Reach set. 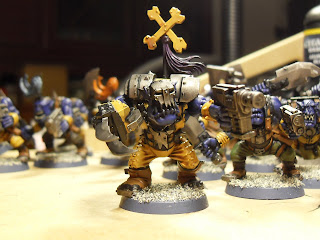 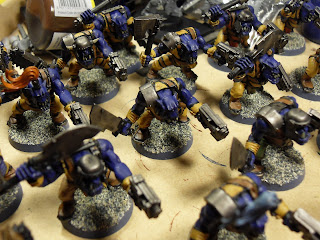 Two of the lovely fellows; one showing off the fact that not all of them are wearing entirely yellow. 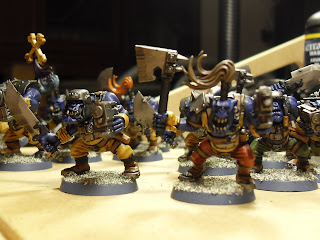 One of the two Big Shootas in the squad. These chaps wear a fetching orange jump suit; they are the Orange Jackets. 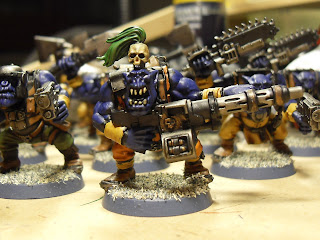 A slightly further out mob shot... 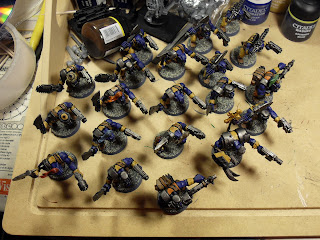 Well I have finally decided on a colour scheme for my Panzers, I have used the Desert Yellow Spray from Army PAinter and overbrushed with Middlestone, then washed with Army Painter Soft Tone....still a little "brown" for my liking, nut no doubt the finished product will get better the more I practice.
Here we have my first Tiger I

And some StuG G's emerging from the woodland.

Pz IV's Hanomags a Tiger II and soem much needed Panzer grenadiers next. 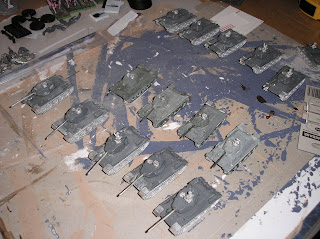 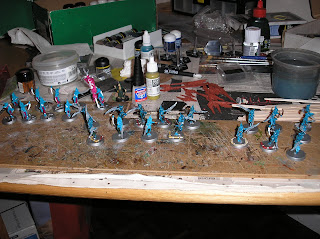 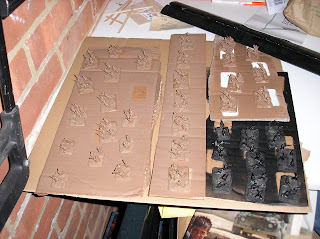 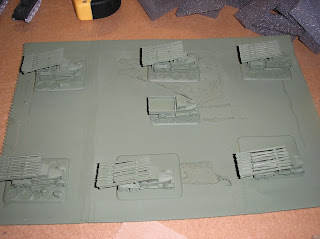 Yep, here I am, ready and raring to post for the first time since... well, suffice it to say it was when the BFG was a nipper, so it's been some time ;)

So, What have I been up to? Glad you asked! In a few words, Russians & Daemons. Piccies attached! So, what are they? Well, the first one there is a truckload of Russian Infantry, and there are more Russian tanks than you can shake a stick at (14 T-34s of both the 76 and 85mm version), and 6 Katyushas (although I need 2 more to field all 6 as it's 2, 4 or 8) and there are also 27 daemonettes currently on the table o' painting - so more rending attacks than a pocket full of genestealers! I'm pleasantly surprised at how quick this posting malarkey is, so feel free to give me a poke and get me to do more if I don't do a post for a while!
What's up next? Well, it's time for the 40k Planetary Empires campaign to kick off, so I'm thinking either mobile IG (as I have Valks & Chimeras/hellhounds to paint) or Dark Eldar (as I have loads of them to paint and need to get them done for the 40k Doubles tournament in January - so watch this space and we'll see what appears!
Posted by JamieM 1 comment:

GoG 2: The one after the first one

My word it's been a long time since I last posted anything.

.... and so it begins. GoG 2 is now under way. This time we've decided to keep it more fluid and we'll update with our own targets soon. Suffice to say we're aiming to have an outing to Nottingham in March so we might well have new stuff for then.

I do have some other little targets set up and I'll update on those as the year progresses.
Posted by Von No comments: