So the day of the Mega game arrived with much excitement! We had something in the region of 22,000 points on the table

The board had been set up on Saturday with many of the forces unboxed and ready to go on Sunday morning. We mustered, for the most part (eh Urn? ;-), just after nine but it still took us a while to deploy. The orks deployed first and it was a horrible sight to behold especially as BFG & the Silverback were using the Green Tide formation. 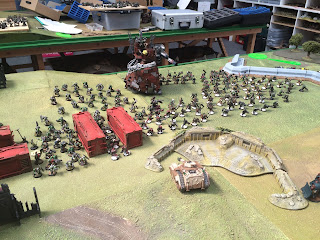 And that was just one sector of the four set up along the table. massed Orks supported by a stompa, grot guns, squiggoths and herdz of grotz to sit on the objectives on their side of the table.

The Eldar's knees were trembling somewhat as they camped across from the horde. 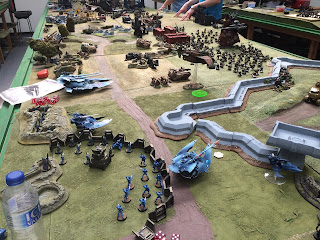 Thankfully the IG had brought there ever so courageous Ogryn to act as a fantastic distraction and speed bump slowing the tide of green down.

Mean while in the center sectors.... 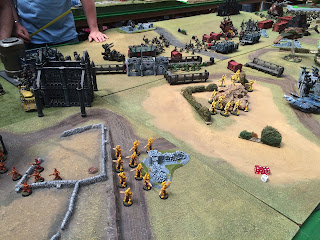 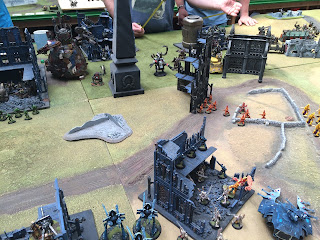 ....a fight was brewing up with a stompa led charge of Killer Kans supported by non-other than Ghazaghull and some of his equally ugly friends! 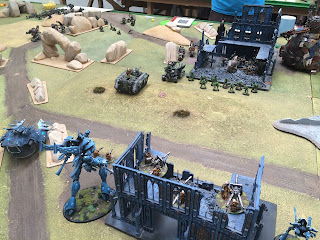 The fighting spilled out of the city into the sparsely populated Badlands where the IG and Eldar struggled to contain a grot battle tank and some Killer Kans with the forces they had in the region. 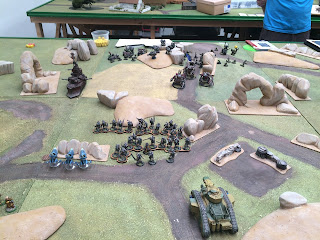 A win for the Orks 28 - 20 at the end of turn three. We played the Eldar turn four, as we had a bit of time, but they only pulled back to 28 - 25 so it is safe to say that even with more turns the Orks would have had it in the bag.

Great game and always great to get the big toys out! 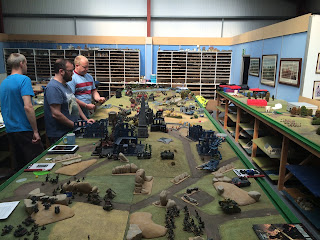 'Til the next one!

I've only now got the Fire Prism to finish with a bit more red on the prism and after that I just need to paint the base for the Scorpion.

Time to bag some Orkies!!!! 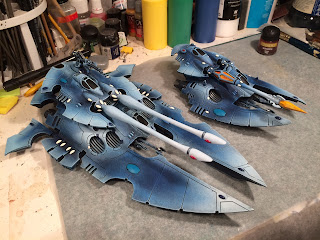 Layering the drybrushing has taken its sweet time but I am still hoping that these bad boys will be finished for Sundays game.

I just need to paint some of the details with contrast colours and pick out the Fire Prism's crystal sections which I think I shall do in a yellow/orange/red ink. 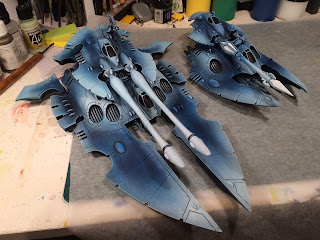 ..is always good motivation to get things done!

I've had the Fire Prism sat on my shelf undercoated for months and the poor old Scorpion has been languishing under my desk at work. Not a fitting place for such a lovely model. Anyhoo, plans for a mega game have galvanized me into getting these done. Its always the way that once you actually get started these things don't take long.

Saturday night I applied the dark blue mass dry brush to both of them and last night I introduced the blue and light blue drybrushes. Tonight I'll add the white to finish the look and get them matching the general theme for my Eldar.

Part of me is a little worried that the white will overpower the effect the blue has but I need to do it or they will look too dissimilar. 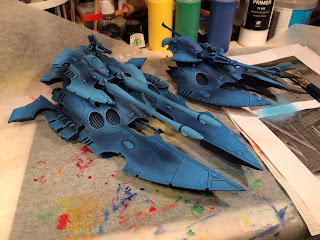