The Green tide flows on


Now that was quick, wasn’t it? Another 30 Boyz to add to the green horde. These ones are from the “Goff” clan and so find themselves with black outfits – drybrushed with grey to pick them out a little and provide a dustier appearance that suits the orks I think.

These boyz were deliberately all given helmets to further link them as a unit and the Goffs are militaristic and no right thinkin’ boy would go into battle without one after all :)

Given the large areas of black, I procured some white check transfers from ebay and laid them on the flat shoulder pads and the odd helmet, providing me with a scattering of the check pattern that is another hallmark of the goffs and hopefully helping to break up the black a little.

This lot also differ from the other two units as they have the old slugga/choppa combo instead of shootas. I appreciate that shootas are apparently better in 6th (the internet says so, so it must be true!) but I wanted a bit of variety and when shooting hasn’t worked and something seriously needs crumpin’, these are your boyz!

Three big shootas and the ubiquitous Nob with a Power Klaw completes the unit and the banner on the Nob got some transfers from the jolly nice Ork flyer that I recently procured and that now takes me to 90 boyz ready for action!

Well, not quite, but it is a start at least!  I’ve had these orks hanging around for years. Initially when I picked them up in a bargain basement deal I thought to myself “These won’t take long to paint and will be a nice change of pace on the battlefield”........

Well, I was right about one thing, each Ork is indeed quick and easy to paint. Unfortunately trying to paint over 100 of the little blighters plus vehicles take a lot more time! Hence I managed to get some units painted, only to discover that I needed to change the odd weapon and so the unit wasn’t finished, or I didn’t have time for basing, or I needed more in the unit, etc, etc. so I ended up with a bit of a mess with some units nearly complete, some not really started, undercoated vehicles and frankly no real drive to get them done. I’ve also long known that I’m great at diving into new things and getting them 95% done…. And then they hang around waiting for the last 5% for ages!

So how did they get out of the hobby slump? Well, it was mostly embarrassment on my part! I realised that out of the five 40k armies that I can reasonably field, I could only do the frankly entry level 1,500 points in Imperial Guard (admittedly I do well here with plenty over to switch things around) and Sisters (although the sisters were built for 5th and really therefore need a bit of updating for 6th).

Looking through the half started armies over Christmas, I decided that Orks were the way to go as they quite frankly looked like fun and I hadn’t used them in ages!

So, out came the clippers, spare parts and some additional cheap unpainted figures from ebay (well, if you’re going to have an army not used much, you might as well reinforce it, right?!?!?) and I set to work sorting them into useful units under 6th edition. I’d long ago decided to use the different ork Clans to differentiate the units as having lots of boyz on the table might make it hard to differentiate between them otherwise, so each unit was assigned a clan, and therefore a colour, and off I went.

These first two units are each 30 strong (yep, I managed to go from zero finished to 60 in one fell swoop!) and are from the Bad Moon (yellow) and Evil Sun (red) clans. All armed with Shootas with 3 special weapons in eash.  Very simple painting with a coloured undercoat, then do skin, metal, contrasting colour for some belts, braces, ammo packs, etc. and then a wash of GW black wash (both my old Badab and new Nuln oil depending on what was to hand) and they were done!

Given the sheer volume of boyz I decided against highlighting further for now as it would take up a lot of my precious painting time and frankly I was sure I’d lose the drive to get them all completed if I did that extra time-consuming step! So, with discretion being the better part of getting an army finished, I stopped with the wash.

For the basing, I decided to go for snow basing for a couple of reasons. It’s different to anything I’ve done before and Gareth’s gaming table, where I see them being deployed most of the time, is snow themed so they would fit right in. the mix that I used is white glue, water, bicarbonate of soda and snow scatter/flock. I then dip it in snow scatter to finish. The odd grey stone is pushed in to provide some variety and there we have it.

I’m really pleased with how they’ve turned out and the fact I feel like I’m on the way to getting an army done – as I tend to drift onto new projects a lot of the other things I need for the army are done and so should make it up onto the blog fairly shortly…… and yes, that does sound like famous last words ;)

Sadly I didn't get as much time as I'd hoped but I did get a chance to progress a couple of bits.

Firstly the scenery for Dystopian Legions is all but finished. I'm not sure that I'm going to do much more to these now as I can't imagine we will get to play DL anytime soon and I reeeeeaaaaallllyyy must get on with some of the prep I need to do for Sin6 and The MARCH to war (big battles planned between GoGs in March.

Thankfully I am nearly finished on the things I need for Sin6 as the Storm Talon only needs a coat of army painter as does the whirlwind turret that I've knocked together to replace the bolters on one of my Razorbacks. 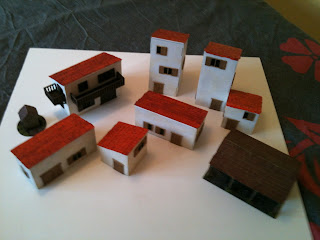 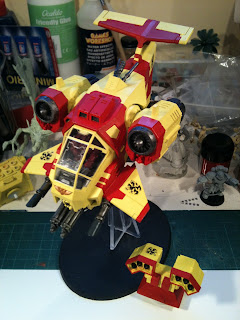