Getting in on the Nid Fun

So where to start.  Firstly, I love the Nid codex, it's a hard hitting well written codex and gives the gamer a chance to develop their own models.  My army needed some decent anti tank fire support, and what is better than a Tyrannofex.  So I purchased a carnifex model to base it on.  Then inspiration took over.
We went to Cuba about 2 1/2 years ago and whilst there we purchased for $5 a wooden crab that came to pieces.  This has lived in various cupboards, including Mr Artillery's as it was the size of Bio-Titan, and we had planes to make a Hierophant titan out of it. 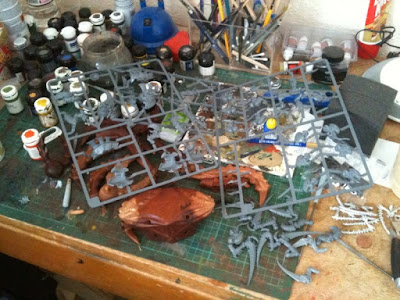 You can see the wooden legs in this pic.  After a few practice assemblies I realised this was too big for T-Fex with it spanning 12" across in all directions.  Using the Carnie body I thought it was slightly too small.  Time for a hybrid!  Out with the wooden legs - not enough detail and to big a 'footprint'.  For the legs I used the MC Scything talons from various boxes.  I then placed two heads on it (to fill two strategically placed holes meant for crab claws).  I acquired a few lictor arms from an old Maelstrom auction on Ebay of nids bits in a bag when I first started a Nid Army many moons ago.  These were perfect for the outside of the rupture cannon, and there are some barrels from Venom Cannons and Barbed Stranglers in there as well.
The last issue I had was weight (the model not me!).  The MC Scything talons were never going to be strong enough to support the weight of a mahogany crab body.  So underneath it, and carefully hidden by CityFight terrain pieces, is a stack of foamcard to take the main weight of the body.
So here we go - my first ever scratch built Monstrous Creature.  It may not be as good as some you see on BolS etc, but this one cost me pennies 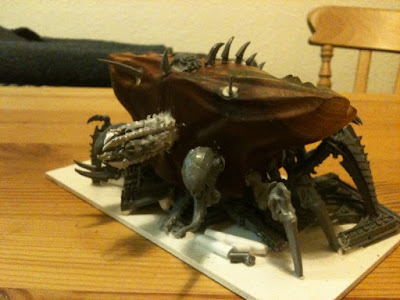 The Pods have landed!! 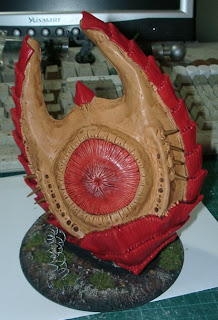 I've finished the pods!
Quite pleased with the general overall look. Probably could have had more details on the top 'arms' but don't think they look to bad.
Just need to bring my Nid army upto date to use them.
Eddy
Posted by Eddy Artillery 1 comment:

I was always miffed that you were expected to put three rippers on each base but the Nid sprues has so few. To get around this I have detached the rippers I had and have mounted one on each 40mm base. To fill the base up I've added Nid eggs. I had a little space in the mycetic spore mold and a little Nid egg fitted perfectly! I've also added a couple of little spines to the bases as if spore towers were starting to take root and grow.

With the codex containing the Parasite character it seemed to me that a ripper style army could be fun!
;-)

The pods are coming!!! 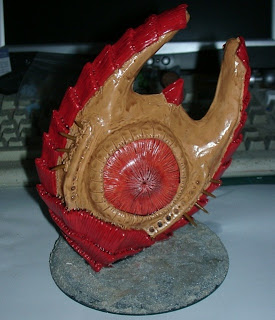 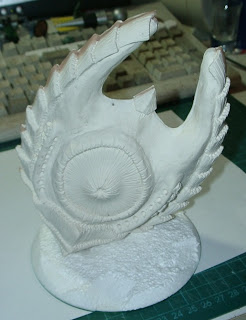 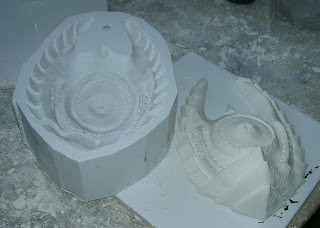 You can see from the photos one of the 'halves' demolded. I stick the two halves together with a hot glue gun and then use super-sculpy to fill in the join between both sides. After a quick bake to set the sculpy I added small spines to represent the spores weapons.
The first pod is nearly finished. Just need to finish the basing and spray the whole thing with Matt varnish (Testors) to take the sheen away.

Pods! Pods! Come get your pods! 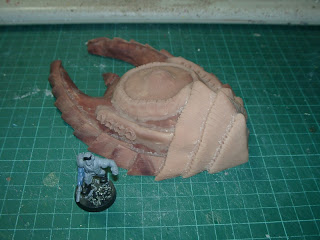 They new Nid codex has a lovely new addition to the army......

I decided to do a two part construction to A) reduce the number of castings B) make putting the pods together easier. I drew one side of the pod on a piece of folded card and them cut it out (old snowflake making styleeee!) This gave me a silhouette that if I kept the master to those boundaries then both sides would match during construct.

I used a core of screwed up tin foil covered with super-sculpy. The super -sculpy is great for this sort of thing because you can sculpt then bake that section dry before sculpting more. Means that you can get a lot of the sculpting done in a short space of time.

After the master was made it was a simple matter of creating a mold from RTV silicon. I'll shove some more piccies up soon.......!

Project Hush is out of the bag: welcome to the World Eaters....

So why World Eaters? Truth be told because I have 2 Forgeworld Dreads purchased at the first Gamesday held at the NEC; not quite sure how many years ago but I wouldn't be surprised if we're talking 2003 or 2004. About time I put them in an army.

First we have the Chaos Lord in his Termie Armour and twin claws. I toyed with giving him a daemon weapon but as Kharn is also in the army I didn't fancy 2 HQs who can both decimate my own side!! 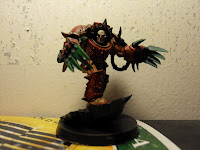 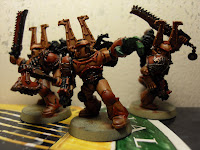 And the one nearly completed Rhino... 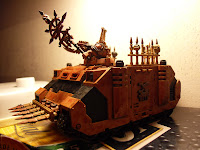 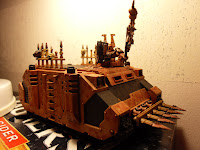 Yes I even have the World Eater shoulder pads and yes I've had those for a while as well. It doesn't half feel good to be completing a project started 6 years ago!!!

So why reveal them now? With 4 weeks to go I think some practice games might be useful just to see how quickly I'll be finishing games and how many cups of tea I can then make for the other chaps.

First game is this Thursday against the Silverback's Nids; I suspect my combat army will be chewed through rather quickly...
Posted by Von 5 comments:

Slaanesh has a Parvane...for you!

Here is the final stage of the Terminator squad for my Slaaneshie Squad. With the extra initiative and the lightning claws I am confident that they will administer the joy of Slaanesh to the non believers. 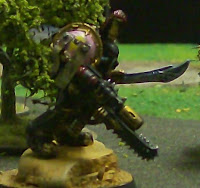 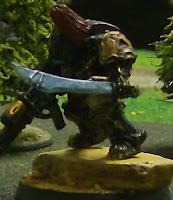 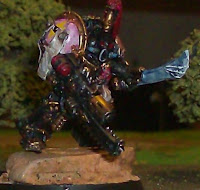 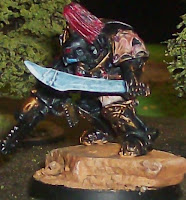 5 attacks ensuring he should out do most opponents, well he will when I point him at the easy targets. This banner has been treated with the Micro Sol, Micro Set solutions. I treated it with Johnsons floor wax first, to keep it smooth, then pu the transfer on with the solutions. Great finish, I can't wait to apply this to my Imperial Marines. 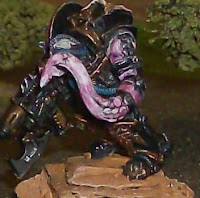 I am intending to use this figure as a chainfist, with the combi-melta for some extra tank busting. 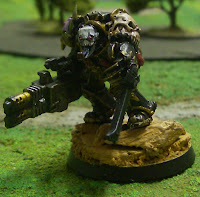 The heavy flamer is a really nice figure, the head is one I haven't seen before, there's the prehensile tongue coming out of it is rather cool! 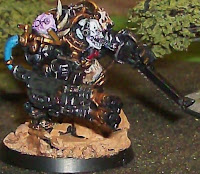 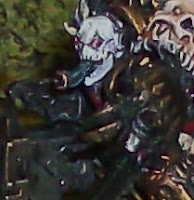 I love the look of this guys S&M mask as well! How'd GW get away with this at so 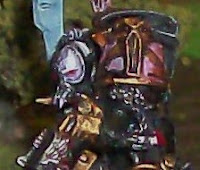 me point leaves me speec 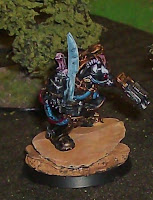 
After a gloss varnish and then a matt coat of varnish, I am hoping that these stand the test of time...after all I'll have these for a very long time I hope!
Posted by BFG 2 comments: 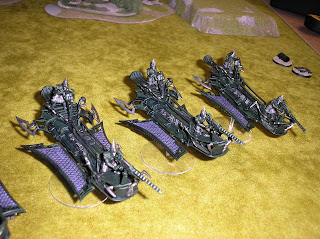 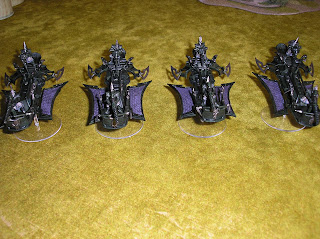 The March army continues apace! The latest additions are 4 raiders. I've spruced them up from the old versions by removing the slimline vane at the back, adding a couple of spiky fins near the back instead, adding the symbols from dark elf shields to the front and just generally spiking them up a bit.

A quick head swap for some of the dark Eldar Corsair heads instead of the high elf heads that the drivers/gunners used to have and a paintjob to match the rest of the force and here they are.

Combining the lightning strike of a rather miffed scorpion with the protective ability of slightly damp cardboard in a hurricane, the raider is the finest in slave taking vehicles that a dark Eldar Archon can get. 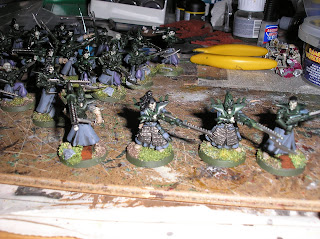 My Dark Eldar have always been my biggest 40k mistake. Not the army themselves (despite their 17 year old codex.... and I'm only exaggerating a little with that), but the way I painted them. I was getting them ready for another tournament and didn't have much time, so I painted the entire army from scratch in about 3 weeks. I had thought that a white basecoat, followed by picking out some bits, followed by a light brown dip (with the army dip product) would provide a quick and nice bone scheme. 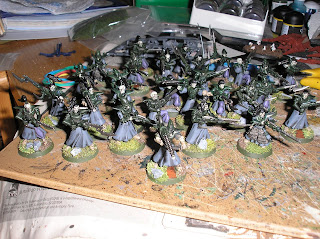 I was wrong. Very wrong. It just looked like I'd undercoated them and stuck a light woodstain on. So, with much derision from the GOGs ringing in my ears, they went away after the tournament, only coming out very occasionally to be used (and mocked for their paint scheme).
So, in much the same way that I rescued the Sisters-of-battle for my first GOG army, I decided to try to rescue the Dark Eldar with this, my third GOG army. To be fair, the army did win 2nd best army in the tournament (of about 40 people) which was doubtless entirely for the conversion work as opposed to the paint scheme.
I've not posted for a while as I've been working on the first figures. I dug out all the plastic bits that I for them and managed to get 30 warriors from the original army and any other leftover bits. As the Dark Eldar plastics are so.... let's be nice and say average, I converted them by using the cloaked legs from both the high elf archer and dark elf warrior figures, stuck with the bodies and arms for the most part from the Dark Eldar figures and then used as many bare elf/eldar heads as I could find and used some dark elf heads for the rest. Went for a green armour & grey/purple clothing colour scheme and a very pallid fleshtone to enhance their evilness.
Pretty pleased with the results and I'm now working on the raiders. Then it's on the the raider squads (for which I have something a little different in mind), then wyches, then ravagers, then..... Hmmm, not sure I'll have time to get this done, but painting to a deadline is the only way to get armies finished I find!
Posted by JamieM 3 comments:

My word! Is that another week gone? Amazing how quickly time travels when you're trying to get 1800 points of a new army up and running from scratch.

You will note then that of the 12 KP previously mentioned 7 have vehicles stats.

Second clue for this weekend? Oh ok then here you are:
Codex is copyright/dated post-2005
Posted by Von 5 comments: