The Taking of Osgiliath, a change in scenery!

Well the wait is over and while this may be a little off kilter from the 40K subjects we GoGs have been putting up here, it is worthy of publication.
As you will all remember way back in the end of May beginning of June the GoGs had the culmination of all the army building that went on. We descended on Lenton and had a weekend mini-tournie in honour of The SilverBacks birthday!
The prizes were all donated by the participants and the choosing order for the prizes was done from the lowest in the listings to the winner. So to be fair...(as we GoGs always try to be!) The loser of the tournie would get the best of the prizes. These ranged from boxsets of 40K troops to ForgeWorld models so the choices were fab! There was one prize that I had my eye on though. Our friend Eddie Artillery had offered to make a custom piece of terrain for the chooser of his nominated prize....anything you wanted.....gulp! My mind was a blur of images from 40K defence positions to LotR set pieces! Then it hit me....what about this game we were just venturing in to....War of the Ring! Great!! A building to house troops in during battles! Faaaantastic!!
Well as was expected my Guard only managed one draw all weekend and got slaughtered in all the other games :-(. Oh well!!!! I get the first pick of prizes......without hesitation I chose the terrain feature.
The next week Eddie wanted to kno what I wanted....I was the proverbial kiddie in the sweet shop! So he offered some suggestions! One of which was the town of Osgiliath.....did I read that right! Osgiliath!! The whole town! Eddie said "Yeah of course!" "I have a great vision of the damaged bridge and the surrounding buildings!". OMFG!!! I thought!
Yes Please!
Now such is the dedication of the man, that he missed out on our gaming nights in order to complete the project.....and here are the results!
These are staged using my Isengard army, as unfortunately my Gondor army isn't ready yet! But you get the drift....these are beautiful models, the terrain features encompassed with the buildings is second to none! 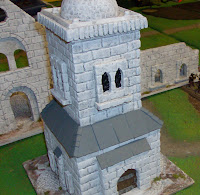 Here is a lovely centrepiece of the tower and the ruined place of worship.

Orcs pour across the river..in the background can be seen one of the huge Mordor Trolls followed by a supporting phalanx of Uruk-Hai Pike!

A Mordor Troll rampages through one of the derelict gardens in the suburbs!

The Berserkers prepare to take the fight to the City!

Ugluk restores order with his scouts by taking another impudent head!

Bow armed scouts move through a once magnificent building, now just ruins!( Note the detail in the trailing ivy and the ornate gateway)

Here is a fine example of a two story building now reduced to ruin, through the onslaught of the forces of evil!

A view from one side of the ruined bridge

.........and the other!
Eddie has put up a ramshackle planked bridge to cover the gap!
The river section covers a full 4 feet! The bridge being the centre piece for this! AWESOME!!

Here is a better shot of the bridge exspanse, complete with makeshift bridging, you can also see the ornamental statues on the support pillars!

A detailed ruin that will take at least three companies of troops!
Well I hope you enjoyed the tour, this has given me a great incentive to paint the rest of my troops for War of the Ring....however I don't have any Mordor or Gondor troops! Perhaps I need to remedy that!!! :-)
Till next time TTFN!
Posted by BFG

Dude - awesome. What more can I say?

Now all we need is some white-ish stone boards to sit it all on and Freeth's genius ideas to use this in his LotR campaign!

Hell yeah! I will be posting ideas on the campaign here shortly!