more from the workbench..... 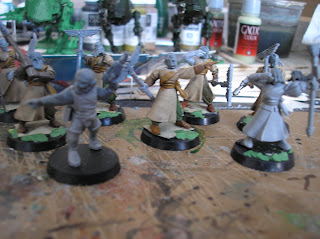 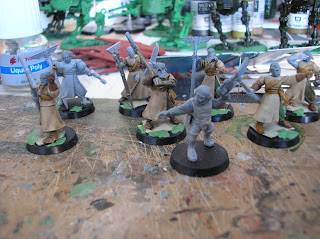 ...Sanctioned Peykers this time!
Unit of 9 with an overseer. The psykers were made from High elf archer bodies (which had previously been meant to be flagellants and then bad guys in the DH RPG!) with heads from the flagellants sprue, a bretonnian archer and a zombie.
The staffs were made from various arms holding spears, etc and and the tops I thought were pretty important to define them as psykers, so I took two plastic Imperial Eagles from the Imperial vehicle sprue and stuck them back to back (to make the staffs double sided), filed them to make the join less notice-able and then used a very thin drill bit to drill into both the resulting eagle and the spear that the figure was holding! Pretty fiddly, but I'm pleased with the final result (and it meant I saved £24 on not having to buy GW psykers.....)
The overseer (who has come out a little blurry) is made from an imperial torso, legs from an Empire Free Company with long boots and the helmeted head from the Baneblade sprue. I used that head as it has some nice optical gear, which I reasoned was to help him spot the perils of the warp approaching!
The pointing arm is there as he is either warning a psyker, or pointing to one he's about to finish off. For their own good you understand....
Posted by JamieM

Wow Varistat!! They are great, loads of bits from the box, looks great!
Not sure I really want to face the 9 strong Psyker squad mind you!

Nobody wants to face the 9 strong psyker squad!.... Well, i shouldn't think so anyway, but to be honest I'm not sure as I've got no idea whether they're great or bobbins! But rest assured, an army list with all these new units will appear once I get around to painting them :)

You must have a bits box the size of Mars to support all your conversions.