Another project I'd been meaning to do for ages.... 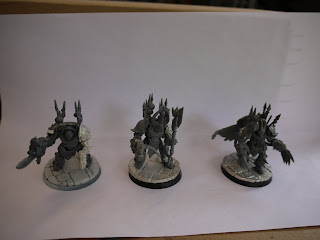 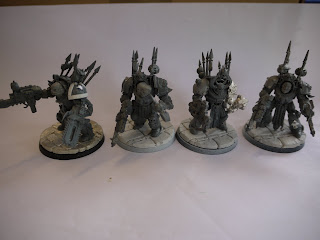 ....was turning my AoBR termies into Chaos termies. I am something of a trader when it comes to GW stuff lying around, and from my box of AoBR I ended up left with the 5 termies, plus the free one I got from White Dwarf.
So, on the basis that if I didn't do something to fit them into an existing army I'd make a new Space marine army just to use them (I'm a wargamer - that makes perfectly logical sense to me!) i decided to make them Chaos termies. So, I'd bought the Chaos terminator lord some time ago to build a lord and so I decided to use some of the weapon options from that with these dudes.
In addition to that, there are various bits from other chaos models and some scratch built chaos symbols with arrows cut from the metal around the top of a wine bottle and some tiny nuts and bolts I bought from Atenocenti ages ago.
I decided to go with non-terminator looking heads, as I think this really marks them out as not regular terminators and went for the spiky bits on the shoulders to enhance that impression.
Along the way I managed to build one to go atop a pair of Dark Angel termi

legs that come on the veteran sprue (and hid the back with the lord's cloak) and so I ended up with 7 terminators!

In addition to being a trader, I'm also a bits box raider, so special thanks goes to Nick for the trade/lend/theft of the leftovers from all his chaos terminators.

My god there is some much flavour in those figures I want to eat them up. They look chuffing awesome - exactly the way they should!

Cheers dude! I was inspired by the picture and the story in the old CSM codex (although the piture makes it into the new codex on p.103) which talked about all the different chaps in Abaddon's retinue so I wanted to make them all a little different. Well, it's been 10,000 years after all...