Clash of the Titans...or not!
Well this last weekend has seen a whole gammut of activity taking place at the GoG's resident gaming hall..Tea Urns garage! 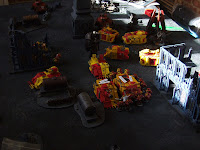 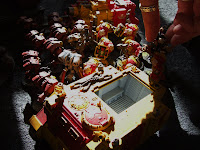 g on the Silverbacks Blood Angels, what a slugging match this turned out to be! The Angels brought Dante and Astorath with them, while the Griffons brought most of their company artillery! The 10 strong Terminator squad going toe to toe with Dante, a Sanguinary Priest and 10 assault marines! The Blood Angels army is a product of the SiverBacks hard work over the last month, painting and building the army pretty much from scratch....all of the painting predominantly having been done with his new airbrush...obviously the finer detail has been done with the brush, but the majority has been air brushed! A very fine job indeed my friend, Astorath's wings are a real work of art, having a real look about them!! Fantastic.....He's also got a Drop pod and a couple of Baal Predators in the army that have been weathered and detailed with the airbrush and I intend to get these on the Blog in the next few days, they have to be seen to be believed! 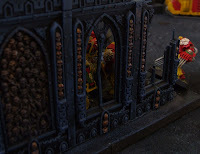 nator squad took quick refuge in one of the burned out ruins!

One of our most proficient scenery makers, Eddie Artillery has quietly been working on a project foe t 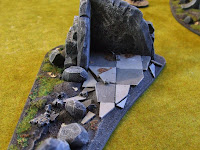 he Silverfox. This is a themed piece of a bombed out Cathedral, there are several

pieces to this model, all the sections are modular allowing the terrain piece to be either a relatively small piece, or stretching to encompass pretty much the whole table top! 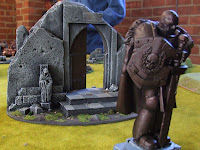 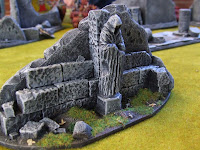 During the early part of the weekend Tea Urns Chaos Marine army was duking it out with Silverfox's Daemon army.

Here you can see the lay out of some of the terrain pieces. 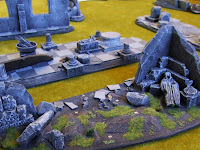 One of our junior members CJ, has just finished a week in Lenton with his Father, the Silverfox and during this week they both undertook the painting and modelling masterclass, CJ has now got a fine Imperial Guard army in the making... 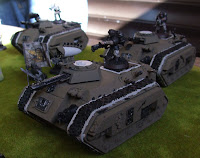 My Ork army took on the might of this army in my first game, and a right royal d

ing dong it turned out to be! The Manticore is very nasty!!

Overall three games a piece and 2,000 pts a side saw a very busy day for all, the overall winner being Tea Urn with his Wordbearers army. Hopefully this will get finished in the near future as it has a lot of beautifully converted models within it's ranks. The arrival of little Urness has mean't that Fatherly duties have taken a president obviously, but hopefully he will find the time to pick up a brush and get a unit at a time finished!
Watch this space!!!
Posted by BFG

Another great day tournie for the Gogs!

The Gogbrero still resides with Urn who got 8 tournie points from 3 wins and 2 bonus objectives. Fox and the BFG both with 5 points from 2 wins and 1 objective. This leaves The silverback and me languishing with 4 points from a win and a draw plus 1 secret objective.