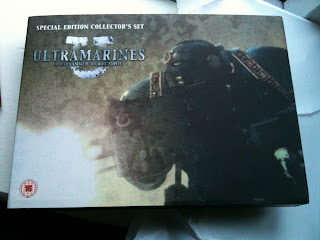 Is it any good?
Well I'm going to say yes it is. Am I Bias? Yes I'm bound to be!
I remember as a teenager leafing through White Dwarf, issue 92 I think, and I was blown away at the launch of 40K Rogue Trader. 20 Years later and someone has finally based a film on it! Great!
The film itself isn't very strong story-wise but it is enough to carry it along. Characters are generally weak but not so much that you want them to die. The animation is quite clunky in places but you'd have to be a real pedant to let it bother you.
I'm making it sound like a mediocre film aren't I. Well it is but I still like it.
Why?
Simple.
The clatter of a heavy bolter, the bobbing whoosh of a scouting landspeeder and the rocket burn of a thunderhawk dropping planetward from a huge marine battle barge. All are the sort of things that bring the game to life for us. This film brings them to life.
It has been a long wait but I think it was worth it.
I hope it paves the way for more.
Posted by Eddy Artillery

I would agree wholeheartedly.
It won't win Oscars ... but a long-time coming and it is worth it.

If only they had chosen Blood Angels......
I can but dream.

Update:
I have finally had the chance to watch the bonus disc....
I appreciate the film even more now.
The Bonus features, documentaries making of and little armoury feature are very well done.
They certainly put the film into perspective and you get a good feeling that they didn't take the project lightly ... the actors interviews were entertaining and in-sightful.
Very enjoyable.