Right, in the picture below you'll see the scale of the challenge that I have set myself. Do you remember those 19 basecoated wyches who were cast asside in favour of painting some malifaux and Pulp City figures a couple of months ago? Well, they're back.


I've entered Nick's tournament and with it looming large on the horizon, I was trying to work out which army to use from the many I have available. Imperial Guard? Too cheesy and disappointing for opponents. Sisters of Battle? new WD codex is totally uninspiring. Dark Eldar? Not painted....


But then it occured to me that they should be painted. They've been sitting around for ages and I've been using a combination of unpainted, old and undercoated figures when playing recently, which frankly is a disgrace to the hobby (unless you're actually painting as you go so each time you play something else has advanced.... Which wasn't the case for me(.


I also came to the conclusion that I never painted an army unless there was a tournament looming to make me do it, so if I didn't do them now it could be years until they were done. So, with a week off in hand (although most of it would be spent with the family) I went for it! The picture you see below is the state of the army a couple of weeks ago near the end of my holiday. There are 19 wyches basecoated with 9 undercoated, 2 venoms with the glue still drying, 20 warriors (3 undercoated) and 1 Archon (I couldn't resist building one after I liked the pose of one of the warriors so much that I had to do a quick weapon swap and promote him!). There are also 2 ravagers and 4 raiders to spruce up to match the new figures. 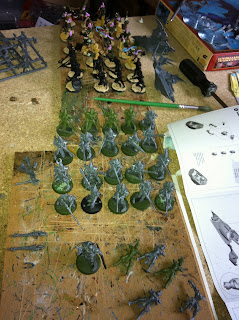 Most of my painted WH40K stuff was finished to go to tournaments - a great motivator if nothing else!