Whilst everyone is getting geared up for 40K VI I've taken a complete jump to the right and dived into Flames of War. I know. Odd considering my love for 40K but for some reason I'm not feeling the excitement and so have transferred my hobby time to the Fallschirmjager.

Now there's a lot of them in an army so it's going to take a little while to do but thought I'd chuck out some WiP shots to show where we are right now.

Thought I'd paint up a single Rifle/MG Squad first to get a feel for the camouflage scheme.

First up add some Flesh (GW) 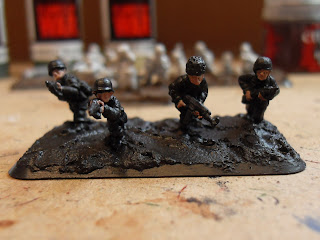 Then Field Grey (Valejo). I'd forgotten just how green field grey is! Just the trousers for this lot. My first try with Valejo and I'm very impressed so far: good consistency and very good coverage. Painful switching from 28mm heroic to 15mm mind - almost had to get the magnifying glass out! 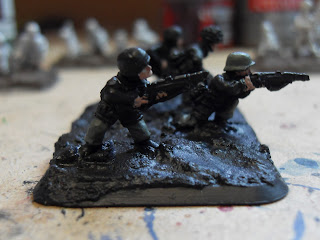 Then German Camo Beige (Valejo) on Smocks and covered helmets. This will form the base for the splinter camouflage. 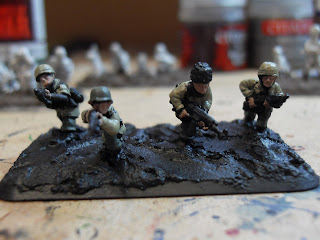 Now the fun begins. According to various paint guides I should be aiming for angles with the camouflage and then some thin green lines to create the splinter design. I took one look at the amount of space to paint and immediately said no to that! Instead I started with German Camo Brown (Valejo) and painted on some zig-zag lines. 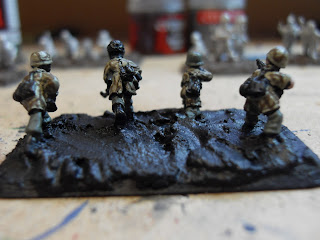 Then using Luftwaffe Green (Valejo) I added blobs to the design. The one piece of advice from the paint guides that I did stick to was to only cover about a 1/3 of the area with the brown. This means that at least we can still see the Beige showing through. Quite pleased with the effect and it wasn't too long a process which is good considering how many of these I have to paint in an Infantry Company. 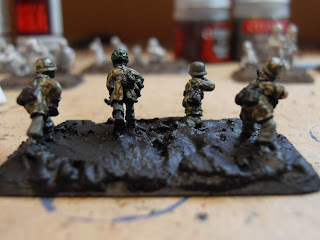 Final pieces were then painted: rifles, SMG, Helmet (Dark Camo Green) and bottles/ammo (green/grey). I then decided to wash them with Earthshade (GW) to tone them down a bit as they were quite bright. This is supposed to be camo so having them standing out like a beacon isn't exactly right!

The base is not yet completed as I've yet to decide exactly how to do them. I've used Army Painter Steppe Grass for the initial covering and allow the mud to show through: I want this to look like there are fighting in the Russian countryside where the grass has been churned up by tanks... 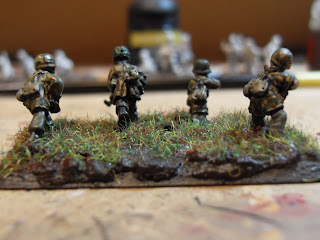 Currently seeing how long it takes to paint the other 8 bases + command team in this Platoon.

Wish me Luck!
Posted by Von

This is encouraging me to check to see just how much I have to do to finish my Germans. I'd finished all the infantry and trucks and just had the guns and half-tracks to do.

If memory serves it was the infantry that took the longest dude! So ...ummm..enjoy that mate! ;-)

Very nice! Good mix of pragmatism (it is 15mm after all) and realism on the camo which is effective. I find it's the wash that really brings the figures to life like yours did as you get to see the facial features and other details that the talented sculptors added.

And "a leap to the right"? I'm going to give you the benefit of the doubt on that one after your "cool" pun on the other comment - You can't get much further right than the Third Reich after all! And given my Soviets means I take a step to the left, does that mean we need to put our hands on our hips and bring our knees in tiiiiiight..... ;)

You know. that look we gave hi when he admitted to being a New Kids on the Block fan.

But it's the pelvic thrust, that really drives you insaaaa-aaaaa-aaaa-aaaane!

Let's do the time warp agaaaaaaain!