It was supposed to be simple.

When I painted the roof top fire escape (see previous post) I was really quite pleased with the contrast between the dry brushed grey and the hand painted red bricks on the corner trims. An effect that I decided to apply to the next building, which at the time was going to be the comic shop, as the it has the same brick trim on the corners. Great I thought. Simple I thought.

So.....lots of bricks. Like I said. Didn't think it though even to the point when I started painting it. I was too excited about brickwork. Thankfully the excitement has been sustained by how it is turning out. It might be laborious painting soooooo  many bricks but goddammit....I do think it looks mighty pretty. 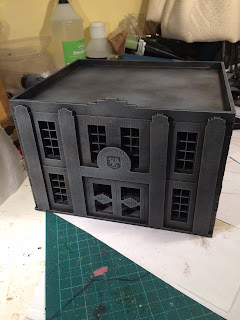 The first night was easy. Dry brushed coats of dark brown, dark grey and then a lighter grey to give a mottled dirty greyish look. 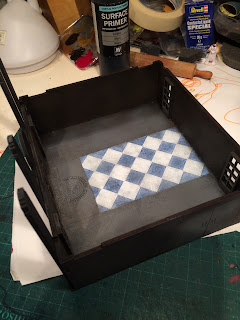 There is an etched floor on the ground level so that have to have some colour as well. 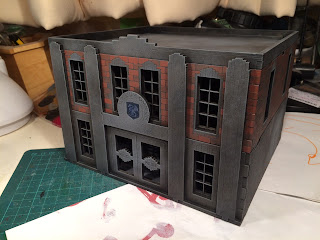 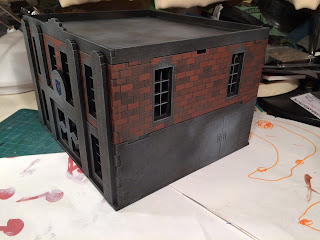 Now I've only done two of the upstairs walls so far and expect that it'll take me two more evening painting sessions to finish the rest but I'm pretty pleased with how it looking so far.

At work, in an attempt to make some other progress, I've been starting on the base stand for my dock crane. The kit was nice but it is great if there is some relief texture to help with the weathering. With this in mind I've started to add rivets to the superstructure. 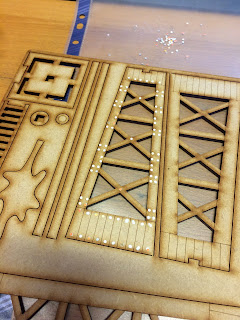 Not an especially long job as the rivets are quick to make using a card makers hole punch. Seriously.....think about getting one of these for your modelling tool kit. Adding rivets becomes an absolute doddle. All rivets should be done by the end of tomorrow lunchtime. 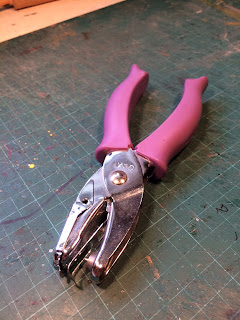 Now that looks absolutely spiffing! I like the range of reds on the bricks, I clearly need to re-visit my old ones that are a little monochrome in that regard.

I can't work out if you're crazy with those rivets..... not sure I'd have the patience ;)

Definitely wouldn't have done the rivets myself far too small and fiddly so respect due for that.