Is it still September?

Cos I'm still plugging away at the scenery.

After finishing the Police Station I've started on the comic shop also from TTCombat. It's a really nice model with a cool recessed doorway. I wanted to try doing something a bit different on the floors of the TTCombat buildings and decided to try a tiled floor downstairs in the shop. This was pretty easily achieved with dry-brushing different colours and basic decorators masking tape. I think it worked out quite well. 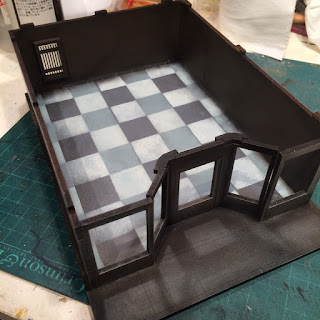 After the success of the tiles I thought I'd try some floorboards. Again with masking tape but slightly trickier as I had to shift the masking tape around between bouts of dry-brushing to get the boards to be narrower than the masking tape. Not a bad effect but it'll be better utilising thinner masking tape which has been ordered from Ebay. 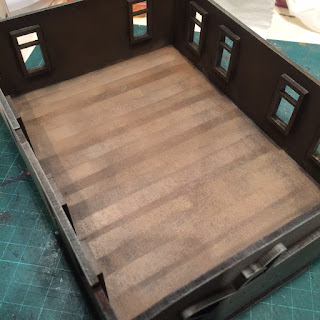 Sadly, at this point, I got cocky and decided to try and add a bit of extra pigment to bring out the floorboards. I tried to paint thin lines between some of the boards to make them stand out but it didn't work very well. Not a total write off but not something I'll do again. I didn't take a photo of it cos I was sulking. So there.

After the laborious painting of the brickwork on the police station I tried to achieve a similar effect, with different tones on the bricks, but with a lot less effort. I painted some of the bricks with the base colour and then dry brushed the colour over the rest. I think it worked okay but there is nowhere near the amount of contrast between the brick tones as I'd achieved on the police station. I like it and it takes a fraction of the time to do so it might win as the technique du jour on brickwork.The corner edging was picked out by hand as normal. 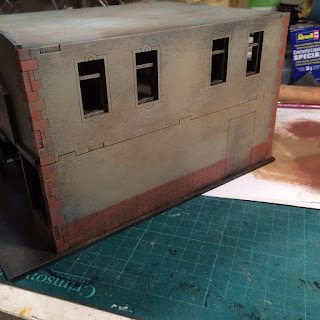 Then on to the frontage. I still need to work on the sign but the shop front was a simple matter of masking tape and dry-brushing once again. I do prefer the mottled look the dry-brushing achieves on buildings as it is less stark than blank colour. I'm looking forward to having some painting time this evening and I'm hoping to all but finish the comic shop tonight. It'll depend on how long the sign takes as the detail is quite small. I think I'm also going to pick out the window frames in a slightly different colour but I might using masking tape and dry-brushing to try and speed that up. 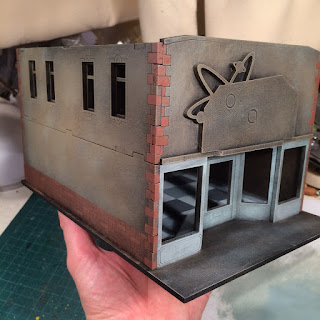 Work lunchtimes are still proving constructive as I've managed to put together a few bits. First up is a two Storage tank set from Warsenal. 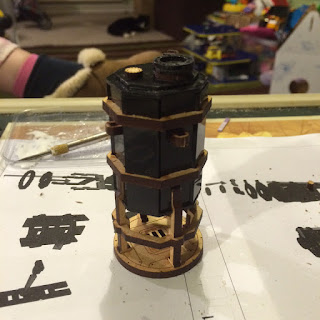 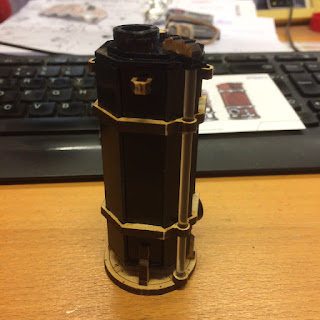 The painted pictures of these and the rest of their range look great but I have to be honest the construction experience wasn't great. The mix of mdf and acrylic felt odd. I'm not a purist but I've got concerns as to how well the acrylic will hold paint. I'll use a proper primer so hopefully it won't be an issue. The 2mm acrylic is also quite brittle and I had several of the tank side pieces snap during construction. Not insurmountable issues but it added to the slight dissatisfaction I got from the kits. Would I buy more of their stuff? Jury is still out. I'll make my mind up after painting them.

A touch more progress on my dock crane as I've put together the pylon for the crane to rest on. I wanted this together prior to working on the crane as I'm merging two kits from different suppliers together and I want to tinker with them to get the interface between crane and pylon right. The added rivets look pretty good and should come out well with metal paint dry-brushed on and weathering added. 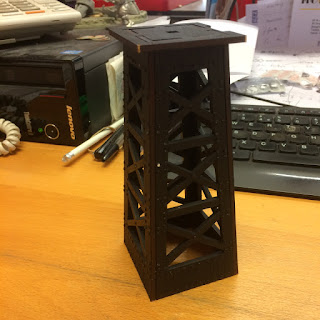 Finally, today I knocked together my TTCombat billboards. These two cost £3.95 post included as set from Ebay. It's on things like this that TTCombat (yes...I am quite a fan) really knock the ball out of the park. Really good characterful small scenery bits that have the potential to add a lot to your buildings and also the game all at a really good price. lovely to put together as well. 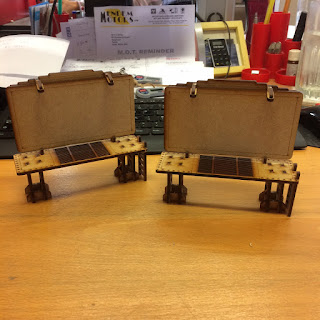 You're either brace or crazy for painting floors..... mine are lucky to get a printout of tiles added! Looks great though.