Junt and I went to Warfare at the weekend. Same old traders mostly but it was nice to see that Blotz were there. Annoying as I’d just put an order in with them two days earlier but nice to see them in person to have a chat to. Of course I came away from their stand with a few bits that I’d not ordered.

I was looking for paint racks so it was also good to be able to get my chosen ones from the nice peeps on the Warbases stand. Some paints and other bits and bobs and I was done. Junt kindly brought me a gift of some skips to add to the scrapyard and they are really lovely. Ta Junt! 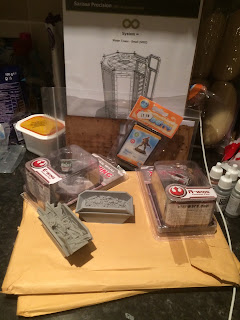 Saturday night I obviously had to put the new acquisitions together. The Blotz stuff went together like a dream as did the Warbases and the water tower from Sarissa. The skips took some drilling for the side lifting points but they should look really good once painted. I'll be doing heavy wear and tear effects as skips get so bashed up. 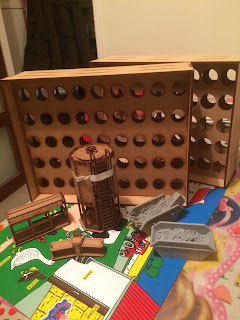 Sunday and Monday night were spent finishing off the Static Caravan, which will be the scrapyard owner’s residence, and painting the two benches I got at Colours from Warsenal. 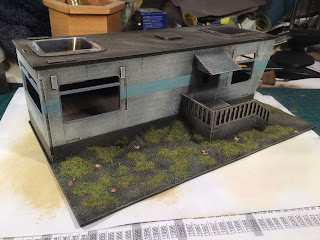 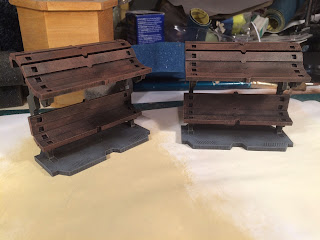 The Blotz order I put in last week arrived at work (always get stuff posted there) and I’ve popped them together already. 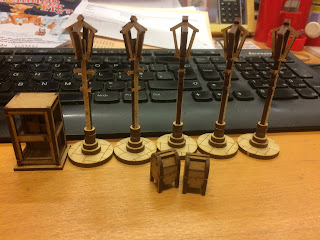 Had one casualty unfortunately. I might, if I get the chance, mention this to Blotz. It was my own fault but it could be prudent for them to edit their instructions to include a special mention about sanding down the lamp post stems prior to trying to slide the other bits on. 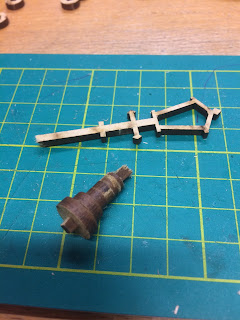 I have also managed to nearly finish prepping the Pulp City figures and I only have two left to do and I’m hoping that I’ll get them done tomorrow. Then they’ll all be ready for the next sunny dry day so I can undercoat them in the carpark. I won’t hold my breath given what the weather has been like lately. 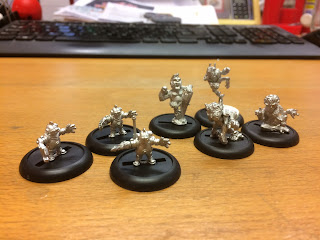 With the Caravan finished I moved on to the cargo containers from the TTCombat ship and they all received a two colour dry-brushing last night to start them off. 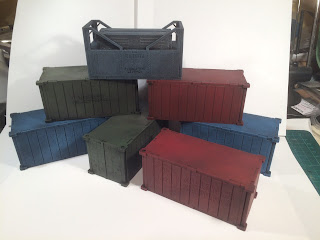 There’s a fair bit of lettering on them which will take a while to paint and then they’ll need weathering and bashing up a bit. Shouldn’t take too long but it ain’t gonna happen tonight as the X-Wings are fuelling up for a sortie this evening. It’ll be the second nights gaming this week!