They say that every cloud has a silver lining.  The metaphorical cloud in this case is the fact I'm a hobby magpie, constantly grabbing the shiny things from my garage and starting them and not being quite so good at finishing them before the next shiny thing grabs my attention.  This can leave large amounts of half finished figures strewn all over the study, steadily encroaching out of the zone I'm allowed for "Daddy's little men".  The silver lining, to stretch this metaphor almost to breaking point, is that sometimes the moons align, the Scooby gang catch the baddy and I get a load of stuff finished at the same time.

First up, some Salamanders with flamers.  I really wanted a unit with the throwback 30k flamers which pay homage to the flamers released in the first ever space marine box in the early 80's, the one with the beakies in.  No real plan for these, but the Salamander legion do love them some flames so I'm sure they'll get some use.  They were a legion that resisted Horus' betrayal of the Emperor and were mostly massacred for their troubles by the traitor legions in an ambush on Istvaan (boo, hiss). 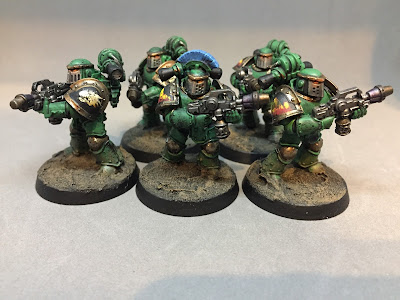 They'll go nicely with my other Salamanders and I tried to get some muzzle burn damage on the flamers.  Decals applied by my own fair hand on one shoulderpad and flames handpainted on the other shoulderpad to hopefully appease both sides of the decal schism (or perhaps to be considered a heretic by both sides!).

Next up, some more hot death in the form of some Thousand Sons Plasma dudes. 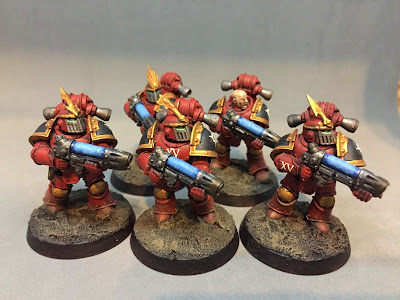 They would ideally be wearing oven gloves as plasma weapons are extremely temperamental can kill the wielder if your dice are bad enough.  So no bad dice out there to stay safe kids.  They originally had converted autocannons, but you know how sometimes you just get a model build wrong?  Took me 2 weeks to admit it to myself as I had a sulk about it, so off went the autcannons and on went the plasmas.  I'm so pleased I did that now. 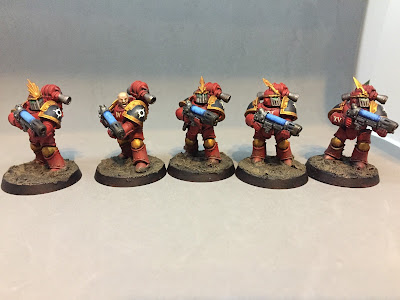 To support these chaps are twenty members of an assault squad 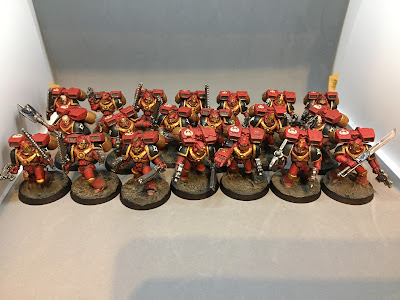 I see these fellas as the glory boys, laughing at the tactical squads who trudge through the mud as these guys zoom overhead, making themselves a perfect target against the sky no doubt.  Sort of like how the RAF and army consider each other.  So lots of gold and fancy decals showing how much they like flying (birds head on the right shoulder pad, flying scarab on the top of the jump pack). 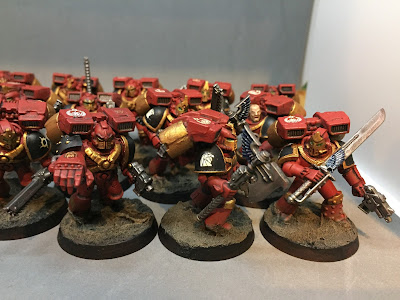 I once again showed a cavalier disregard for the make of jump packs in existence during the heresy and used far cheaper 40k ones ( I could buy three units like this for the price of the proper FW one).  All the armour is the correct mark (IV and VI) as I do have some standards... the 30k world is probably as close as GW games get to historical gaming with regards people worrying about exact markings, colours, who fought with whom, etc, but I think we all have to find a level we're comfortable with these things.  The heads are the simply superb Forgeworld upgrade ones for the most part and using these covers a multitude of sins in my eyes!  So look at the pretty heads, not the jump packs... 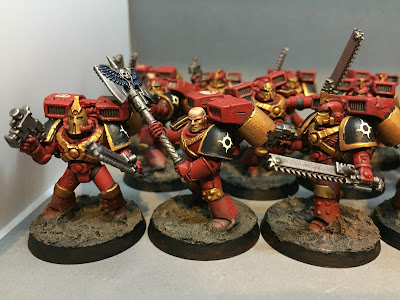 Some nice chunky axes and swords in the unit and some marines with their helmets off, because it appears to be a tradition that someone in every marine unit won't wear the hermetically sealed life support and vital armour because he wants the enemy to see him snarling...... You can just imagine the conversation

"Sorry Amon, you're the last one here, so you have to leave your helmet behind today and grimace for the next 3 hours about the grim darkness of our present"

And finally, 32 more gobbos to go with the ones I did a few weeks ago. 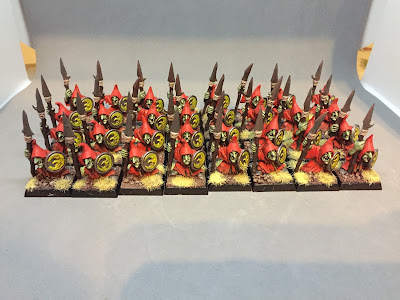 Same recipe as the last ones and I was regretting deciding upon two highlight layers on the skin by the time I got to the second one... 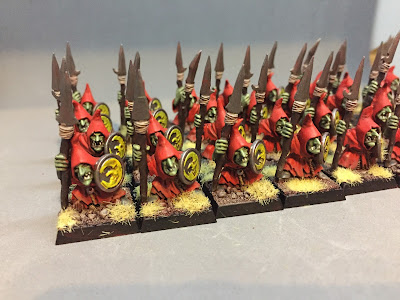 These lads will be trampling onto the gaming table shortly and then probably promptly running off again.  I'm hoping to have time to bring some crazed fanatics and netters to the challenge, but I shall have to see how the week goes as time has gotten away from me a little! 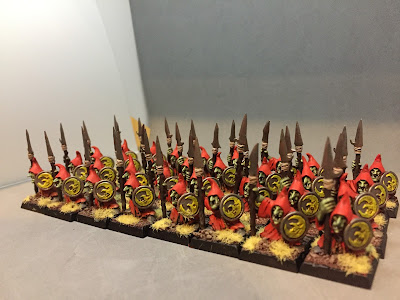 Great job on these Jamie!