We've not had a chance to play much more 40K after our flurry of games in the middle of the year so it was good to pile round to Urn's place and get the marines out.

This, as it turns out, ended up being a marine on marine battle as the sneaky underhanded Raven Guard fell in with the flighty White Scars to try and take some clearly high important objective from the Brave Heroic Howling Griffons whilst denying the Griffons their spoils of war! Fiends! 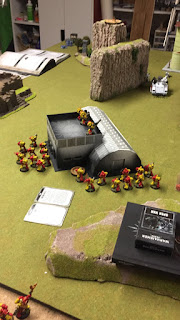 Things started bad for the Scarlet and Gold when the Turncoat allies managed to steal the initiative however not a lot of firepower could be brought to bear upon the Griffons so casualties were light.

Sadly the return fire from the Griffons was less then impressive.

The mission had both sides turning up piecemeal and this served the Scars well as their bikes arrived with good effect as did their Raven guards assualt squad both of which were quickly bearing down on their goal. 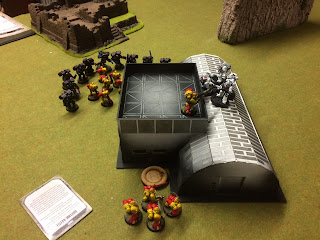 An attempt by some Terminators to grab their opponents objective was stymied somewhat by them being outnumbered and overrun. 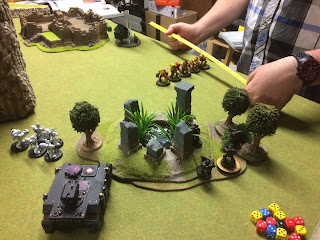 Thankfully the second terminator squad had scared off the scars on bike who didn't get back close enough in time to help get onto the Griffons prize before the game was called.

A draw but a real shoeing for the Griffons. Shame. The termies were itching to have a go at the bikes.