The blog gets all growed up!

We're hobby butterflies, seemingly utterly incapable of keeping our minds on one thing..... so a passing comment from Eddie about how the blog was TEN FREAKING YEARS OLD led us down a meandering path of increasing geek-based excitement and has meant we've agreed to mark the occasion with something awesome..... as Britney might say, we've decided to "hit me baby one more time"!

The blog was started to chronicle us getting a new army painted from the large amount of unpainted figures we all had on our shelves of holding.  I can happily confirm that we now all have far, far more stuff on our shelves than we did back then and so we're going to do another "Tale of X gamers", but this time there are 7 of us instead of 5!  The idea is to end the work with a playable army of around 1,500 2,000 and spend a weekend in Nottingham at GW HQ being utter geeks!

a) paint at least 250 333 points of models (cumulative counting is fine so you can work around real life) from March until August.  Your 250 333 points must be uploaded to the blog by the end of each month or suffer relentless mockery from the rest of the participants until you've caught up......
b)  Attend GW HQ on the September weekend to celebrate!

To start things off, I'm going Empire/Free peoples s I've had a box of stuff hanging around for about 10 years that I've occasionally added a bargain eBay win to.  This is the start of me getting it sorted: 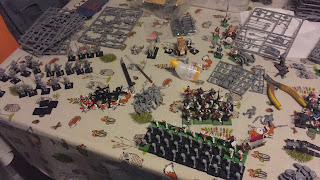 Lots of troops planned, at least one monster and some warmachines I should think..... exciting times!
Posted by JamieM

Great stuff guys - this looks like it will be fun!