Now, I've always been a bit of a Games Workshop fanboy - Warhammer 40k and Warhammer Fantasy Battle were what brought me into this hobby.  It's no great secret that GW diverged somewhat from what made them so successful during a lot of the 2000's....... but they've recently rediscovered a lot of what made them such a big draw in the 80's & early 90's - actually giving the customers what they want instead of telling customers what they should want and utterly ignoring them.  Mind blowing stuff, for sure.....

One of the things they've rediscovered is that wargamers rather like full games in boxes with great figures and so they've recently been churning boxed games out as often as they can.  A couple of years ago I bought the reinvented Warhammer Quest game (basically a dungeon crawl where you're all on the same side against AI controlled enemies) and our gaming group really enjoyed it, so when GW announced the next Warhammer Quest game would be in the 40k universe, I was absolutely in!

I decided to do something a little different though and despite the lovely figures GW were including in the game, I decided that this was a great opportunity for me to instead convert all the required figures from miniatures and parts that I already owned.  This would give me something unique, save a bit of cash and scratch the converting itch I always have.  Oh, and attempt to ever so slightly rebalance the wargamers scales, which are always heavily weighted towards buying shiny things instead of painting them.  So, I picked up all the game parts you needed to play for a song from eBay and got converting..... and I now present the first completed figures. 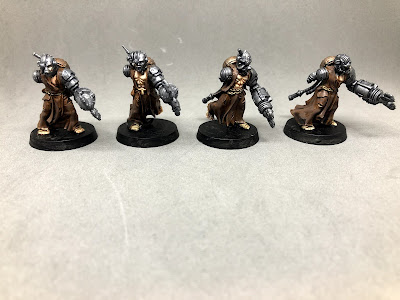 These first chaps are my take on the "Negavolt cultists" - lunatics who seem to have taken to electrocuting anyone who strays into their territory.  As you do.  I had some bodies from the old empire flagellants and having found some oversized power arms, they reminded me of fiddler crabs so I went with one massive arm and almost nothing on the other side. 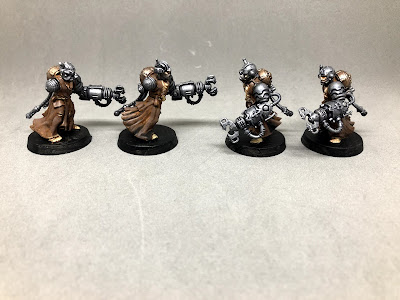 Weird electro machinery on the back finished the look. 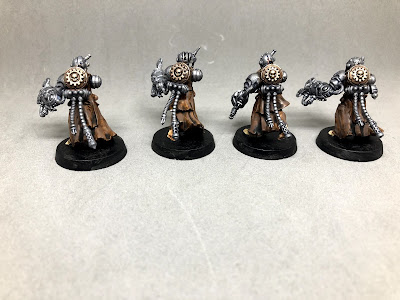 These next ones are my version of spindle drones.  The "proper" ones are a little metallic and clean for my taste, so I added some 40k weirdness with odd little robed individuals.  Are they robots, cyborgs or something else entirely?  We may never know.... 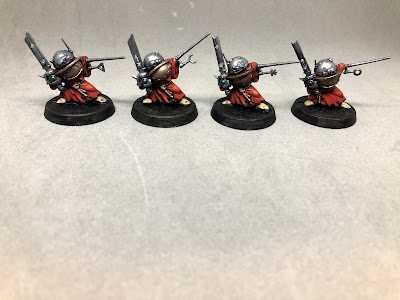 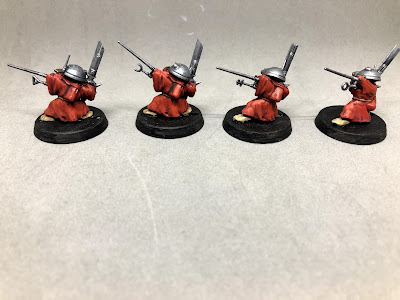 Now, having said I was going to convert ALL of the figures, I now must admit to not converting these next four.  At all.  In any way, shape or form.  I stuck to that resolution about as well the one I periodically make to stop buying figures until I've painted a load of what I already...... I just really liked the figures and so caved in and bought myself some. 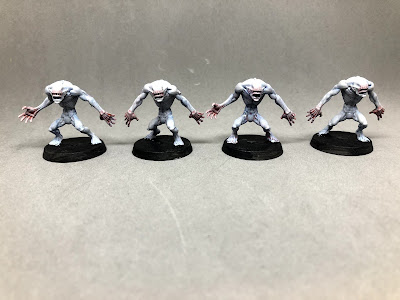 Anyway, these unsavoury fellows are Ur-Ghuls - ghoulish monsters who seem to use warp space to stalk their prey.  Or something.  Anyway, I suspect I wouldn't like to meet them down a dark alley, but they were delightfully easy to paint and hence why they leapt to the head of the painting queue. 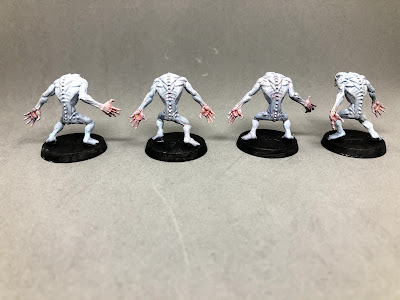 And here they are, all together in the class photo. 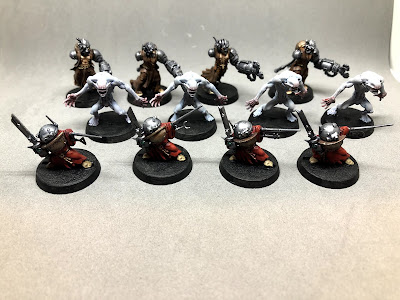 I love those Cultist conversions!