Here's this week's update and a little different this time: pray silence for a battle report from the Planet of Lushall IV.

My son, henceforth called Evil Monkey, is collecting a Space Wolves army. Yes that's right; he's only 11 but has opted for the cheesiest, beardiest army out there :-)

He's been busy painting Blood Claws and as he's young his attention has wandered a bit so we decided to have a battle with what he has - keep the enthusiasm levels up as they say.

Totting up his painting, building and in boxes stuff we got to about 725 points:
Wolf Priest, Ven Dread (AssaultCann + DCCW), 10x Blood Claws in Drop Pod, 6x Grey Hunters in Razorback with T/L lascannon.

Up against this I put my Iron Warriors:
Lord with Khorne Daemon Weapon, 11x CSM las/plas, 9x CSM aspCh, Flamer in a Rhino, Vindicator.

And we set the scene as thus: The planet Lushall IV has recently repelled a Tyranid Invasion. Their scientists are studying these Tyranids in order to better understand and maybe breed their own. A Chaos insertion force has landed and is about to assault a small complex with a Storage Tank containing Tyranid Biomass. The nearby Space Wolf garrison has despatched a force to intercept and destroy the Chaos group. 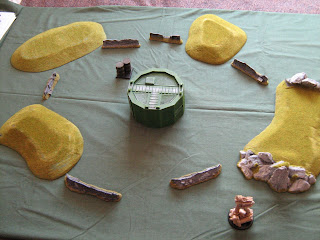 Chaos wins deployment roll and sets up like this; opposite are a Razorback and Dreadnought - both hidden from view by the storage tank. 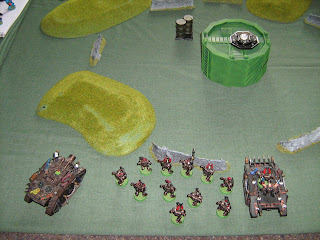 First turn and Chaos races forwards with the Rhino disgourging its troops by the objective (we also decided that troops had to be out of transports to claim as they're supposed to be trying to syphon or protect the contents). End of Chaos turn 2 vp.

Space Wolves turn and the Drop Pod scatters 11" back from the objective (it's the old Large Template below - honest). The Grey Hunters leap out of their Razorback by the objective and fire the meltagun at the Rhino; bang goes the Rhino. CSM who got out last time decide to warm their hands on the nice fire behind them.

End of Turn 1 below and Chaos 2vp; Wolves 1vp 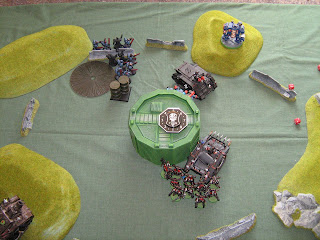 Next turn and the Vindicator moves to line up a shot on the Grey Hunters; Lascannon CSM squad run over the wall to get to the objective. Vindie fires, hits all 6 Grey Hunters! I pick up the dice and Evil Monkey shouts "6 ones would be nice". I smile and throw... 3 ones. Bugger. The Hunters pass their morale check. 2 more vp for the Chaos boys.

His turn and now I realise that those damn Blood Claws that were hidden from my Vindie can actually reach the Lascannon CSM squad by stringing out Conga style. They can't be that good in assault though. Right?

28 dice later... yes only 7 of them reached my lines. 7! 28 dice! Beserk charge or some such nonsence! He then fires up the Power Fist, hits twice and rolls double-1! That'll teach him. I fail my leadership roll; he cheers; I say Chaos Glory; he boos; I pass the second attempt. End of Combat picture is below. Lots of Blood Claws still left... 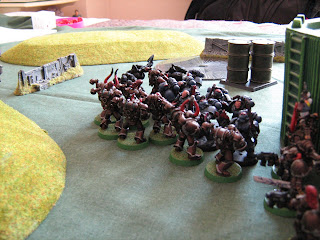 Turn 3 and my Khorne Lord charges into the Blood Claws. The rest of his unit have no space to charge in so elect to go Grey Hunter hunting. We fire at them and cause 5 wounds! He saves all 5. Heck.

Still my Khorne Lord on the charge will be fantastic. I end up with 12 attacks thanks to the Daemon Weapon. After the blade whirls lots we count up the dead Blood Claws; 2. I demand a recount! Still 2. Oh dear.

His Wolf Priest with Frost Blade has 5 attacks and kills 3. Oh dear. Again. We lose the combat even though his power fist missed this time. I check the rules on Fearless HQ with non-Fearless unit and discover he loses Fearless. Bugger. Luckily I pass morale. 0 vp for me cos the combat has taken my troops outside 1" and I've moved my assault squad too far away!!! D'Oh!

His turn 3 and let's head straight for the combat shall we? Khorne Lord rolls his 2 dice; a 3 and a... 1... oh bugger. Still he makes his invulnerable save. My remaining 4 csm prepare to survive the Wolf Priest who only has 5 attacks so 1 of them should survive. Right? Nope. All 4 are killed by the Priest. The remaining Blood Claws now pick on the Lord and down he goes... Power Fist Blood Claw hit but then rolled a 1 :-)

He consolidates right up to the objective!
End of Turn 3: Chaos 4vp; Wolves 5vp 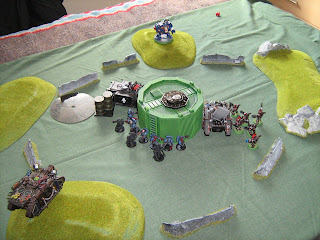 His Turn 4 and the Blood Claws (missed by my Vindie) and his Dreadnought charge the CSM squad. This is going to hurt! After much munching all CSM are killed; we kill 1 Grey Hunter. 1. Now I have no troops left. Actually all I have is a Vindicator. 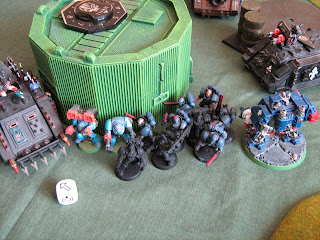 Turn 5 the Vindicator scatters but still kills the last 2 Grey Hunters (yes they are the old terminators you can see! - the old style Immolator is a Razorback obviously)

His Dread charges the Vindie and immobilises it!
End of Turn 5: Chaos 5vp; Wolves 9vp Turn 6 and the Vindie hits the Dread and blows the DCCW off! His turn 6 and nothing happens.
Game Ends! Final tally: Chaos 5vp; Wolves 11vp

Yes the Wolves have protected the precious Tyranid Biomass and so the experiments on Lushall IV can continue. Evil Monkey wins. Goddam Space Wolves.... 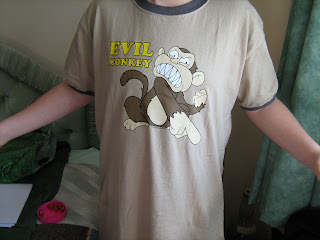 Good battle sir! Even better tactics by Clinton, but I guess you'd say he learned it all from watching his dad?

I guess you could say he learnt some aspects of the game from watching his dad, but winning?????