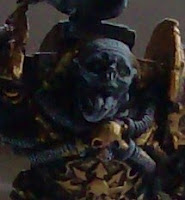 This is the start of my Chaos Slaanesh Terminators, kindly exchanged by Varistat for my old Griffon, for his nasty Imperial Guard army...still more on that later I am sure!
When Varistat gave me these chaps, they were undercoated white and devoid of bases, Vari needed the original diorama bases for another project.

Heavy Flamer with chain fist, I will be using the Tentacles Terminator as a chainfist as well, 2 combi-Meltas and a Power weapon and Combi-Bolter.
I was just grateful to get these as a worthy addition to my Black Legion, I already have 8 Terminators, which are okay, however they still lacked something! I couldn't put my finger on it....until I g 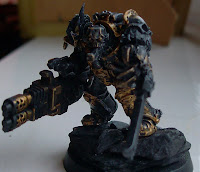 ot these, they have been successfully transformed through Vari's insight to 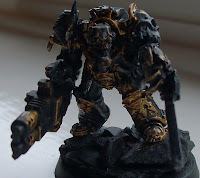 a dynamic posed force, nice little touches, such as the use of a heavy flamer and a fuel tank from a vehicle, the addition of melta nozzles to combi-bolters. The use of Abbaddon's body and some old metal "Imperial" lightning claws just make the whole unit unique, subtle changes that really work! I understand that Varistat uses foil from champagne bottle tops for the seals on the shoulder pads! That explains a lot!
I am hoping that as I paint these I can do justice to the initial work. I decided on a black unde 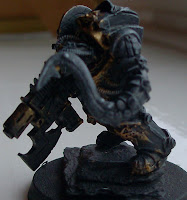 rcoat, old habits and all. Once I had them undercoated I drybrushed them white, now this isn't something I would ordinarily do, however, given t 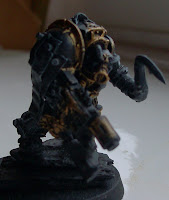 hat I wanted to dry brush the metal colour on after, this would go better on the white, my plan being to go back after and pick out the plate background in between the raised areas drybrushed! So on with the metal dry brush and next the "colouring" in of the other ares between the filigree and base relief of the models, I intend to post as I go along to show them as they develop, at least that's the plan!

You can see here the use of tentacles from one of the chaos plastic sprues, with a different head. 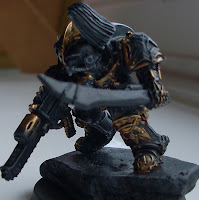 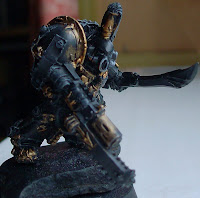 The bases are simply slate stacked and then some larger grit positioned around, I will detail them after painting further, the figures are pinned in place though using my Como model drill and good old pins, they do lend a lot to the size and imposing feel of the models from a table top perspective, as these are the older metal Terminator bodies they are a little smaller than the later plastic ones. This image shows nice use 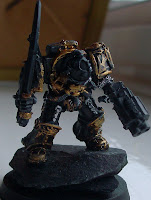 of a Slaanesh shoulder pad!

So next stop colour!!