aristat man, I am back on to achi

eving my GoG army target for 2010, this will be a 2K pts force for the German Wehrmacht, late war.

He popped over on Thursday of this week and gave me a run out with them against his Russian force, which is very, very scary. The battalions are absolutely huuuuge! 16+ stands in each. And he still managed to get 4 Katyushas and two platoons of mixed T34-76's and T34-85's......cripes D.M!
One of the best units I have found to be the anti tank guns, particularly the PAK 40. This little baby has better anti-tank than the tanks carrying the same gun, it can dig in, which guns like the '88 can't and has bulletproof cover, with footproint of 32" it's a must.
These 4 guns were put together and painted in an afternoon, I based them using tile grit then painted this, I had also stuck some larger stones to the base prior to the grit.
Once p 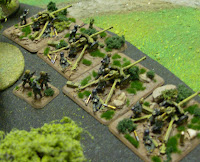 ainted they were highlighted. I then ventured to adding "tufts" Silflor i

n this case. I also added some clumpage foliage, from any railway hobby store and added some sprigs from an old Warhammer pre-painted and flocked hedge. (This has lasted me years, I still have a load of it left as well.)

I really wanted to show the before and after with these photos, my camera isn't the best unfortunately, so Ihave done what I can with these.

I love the finished effect, the combined terrain on the bases just lends loads to the figures themselves.

Hope you like them, next will be the Panzergrenadiers.
TTFN
BFG.
Posted by BFG

Darn it, those PaK40s gave me fits all game - now they're painted they'll be in every list!

Very nice. I shall have to make sure the camo and basing don't make me miss them when they hide in terrain like they always seem to ;)